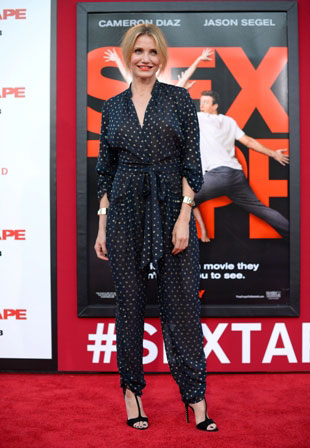 Just a Little Too Much

Everyone knows that marriage consists of more than just sex.

Successfully married couples have to be equally yoked, best friends and partners in crime to make it to death do us part.

However, sexual intimacy and attraction is definitely needed in order to have a successful marriage as well, and many couples can attest to the difficulty that arises when their careers and children are taking up all of their time.

Initially, there is no lack of spice in their romance.  Their theme song could have easily been “Anytime, Anyplace” by Janet Jackson because no place is off limits and nothing is taboo for them when it comes to making love.

Although Annie’s parents don’t think she is mature enough to marry “Greg” as they call him, the two quickly transition from intense young couple to old married couple with kids.

Jay works at a radio station that constantly gives their employees iPads with a killer playlist.  Jay is able to in turn re-gift those iPads for his friends and family members.

Annie is a popular blogger who has drawn the interest of Piper Bros., a successful corporation looking to expand their online presence.

Unfortunately, they have to schedule time in advance to be intimate with one another.

When their attempts at spontaneity fail miserably, Annie comes up with the “brilliant” plan to make a sex tape consisting of every sexual position known to man.

Their escapade turns into a three-hour movie that is immediately blasted out to everybody who has received one of their iPads, from Annie’s mother to their best friends Robby (Rob Corddry) and Tess (Ellie Kemper) to the mailman to Piper Bros. head honcho Hank (Rob Lowe).

As a result, Annie and Jay have to retrieve those iPads before their reputation is lost along with their privacy.

“Sex Tape” has a simple storyline with a simple script and simple characters, but it is also simply hilarious at times.

Hank’s cocaine binge with Annie and his obsession with Disney paintings featuring his likeness instead of the real characters are bizarre and classic.

What is even more bizarre is Hank’s tattoo in honor of the late Eazy-E.  He explains to Annie that he misses him even though they never met.

The chemistry between Diaz and Segel on screen is obvious.  However, their performances are not quite as good as it was in “Bad Teacher.”

Howard (Harrison Holzer), Robby and Tess’ smart-mouthed son is the typical child today with no respect for his elders.  Nowadays, adults have excuses for bad children like him such as A.D.D. and A.D.H.D.  In the words of my sister’s former co-worker in education, he just needs his A.$.$. whipped.

Despite the hilarious scenes in “Sex Tape,” written by Segel, Kate Angelo and Nicholas Stroller like the couple trying to make love while listening to Jodeci’s 1995 hit song “Freek’n You,” the film too closely resembles an actual sex tape.

Even though moviegoers will obviously expect nudity, the only thing really preventing “Sex Tape” from actually being a sex tape is full frontal nudity.

Segel should be applauded for many laugh out loud moments and being able to get Lowe to completely make a fool out of himself.  But the overtly raunchy scenes will prevent the film from getting its real message out.

The ultimate message of the film is that in order to add spice into a relationship a couple simply has to remember what made them want to make love to their significant other in the first place.