Film Review: ‘Think Like a Man Too’ Stands on its Own 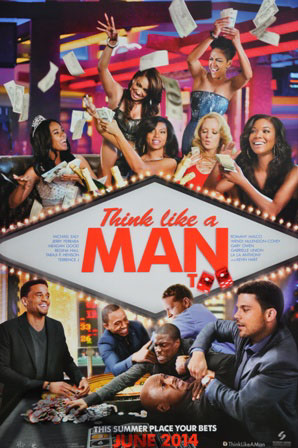 Sequels can be a tricky endeavor even with an extremely talented cast and a built-in audience.

In order for a movie to get the “part two” treatment, it has to have been a huge box office hit and/or an instant classic with a cult-like following.

Often sequels do not live up to the hype of the original, and fans sometimes cringe when they hear that Hollywood is remaking classics like “Sparkle” or creating a sequel to “The Five Heartbeats.”

This is often because sequels usually try to recreate the storyline of the original, making it an unoriginal project.  Director Tim Story and producer Will Packer are smart enough to think outside of the box to create a totally new experience with “Think Like a Man Too” with the same characters that audiences grew to love and appreciate.

What sets the “Think Like a Man” franchise apart is the relatability of the characters.

Everyone can find themselves in at least one of the characters and they have friends that are almost identical to the remaining characters.

Cedric (Kevin Hart) is the guy who talks a good game around his boys, but behind closed doors his wife wears the pants in the relationship.

Dominic (Michael Ealy) is the talented and ambitious one who dates women out of his league financially, which can sometimes threaten a man’s ego.

Candace (Regina Hall) is the beautiful single mother.  Although she has a lot to offer a man and is the perfect woman, many men will flee from unwanted responsibilities.

Nevertheless, she finds a wonderful guy in Michael (Terrence Jenkins) who loves her and her son, but might love his mother a little too much.

Despite all of the shortcomings of the guys and girls, the original movie showed how most of the men realize the errors of their ways and become the type of men that all good women deserve.

In “Think Like a Man Too” the whole crew gathers in Las Vegas, the perfect location for the ultimate bachelor/bachelorette party and destination wedding.

Cedric somehow maneuvers his way into being the best man even though God Himself knows he does not have the maturity to handle such a responsibility.

He books the Constantine suite in a Vegas hotel, even though the nightly rate is even too rich for Floyd “Money” Mayweather’s blood.  He thinks the room is only $4,000 per night, but the pillows probably cost more than that.

Cedric desperately wants to outdo the girls and their bachelorette party even though the groom is only concerned about marrying the love of his life, and Bennett (Gary Owen) wants the guys to see the “Jersey Boys” stage play.

Lauren (Taraji P. Henson) wants the bachelorette party to surpass the bachelor party in debauchery, but somehow the girls have to get out of going to a Dionne Warwick concert planned for them by a future meddling mother-in-law.

In order to rid themselves of an unwanted guest, the girls have to hook up their older companion with a good man, because she has not found anyone to replace Deacon Johnson (J. Anthony Brown), who passed away prematurely.

They call in Uncle Eddie (Dennis Haysbert) who is player enough to have his own theme music (“Between the Sheets” by The Isley Brothers) every time he graces the screen.

However, the guys and the girls find themselves in some compromising positions, which places the entire wedding into uncertainty.

“Think Like a Man Too” has no worries about disappointing because of the comedic genius of Hart and his rapport with the cast and the crew.

The chemistry between all of the actors is evident.  They are not acting when it comes to actually being friends.

Like its predecessor, it benefits from cameo appearances by celebrities such as George Wallace, Coco Austin, Corey Holcombe, Ronnie DeVoe from New Edition and Bell Biv DeVoe fame, Drake and Fonzworth Bentley.

The legendary Kelsey Grammar even lends his talent to the film as Lauren’s boss Lee Fox.

Writers Keith Merryman (screenplay), David E. Newman (screenplay) and Steve Harvey (book) capitalized on the fact that they did not try to recreate the original like the writers of “The Hangover” franchise.  They simply created a new story under the same umbrella.

Nevertheless, moviegoers will not be able to help comparing “Think Like a Man Too” to its first installment and the original “The Hangover,” which is arguably the best Las Vegas bachelor party film ever.

Regardless, they created a sequel that can stand on its own, and one that makes “The Hangover” sequels seem even more unoriginal and less entertaining.