‘About Last Night’ All About Kevin Hart 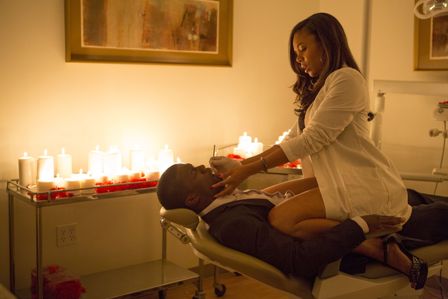 Thanks to Kevin Hart and Regina Hall’s “creativity,” those who see “About Last Night” will never look at a dentist’s chair the same (Photo Credit: Rex Features via AP Images).

I have said it once and I will say it over and over again.  To date, there is nothing unique about the storylines and characters in Kevin Hart films and that is not a slight.  However, there is something unique about his comedic talents that can take a formulaic and unoriginal screenplay and turn it into a crowd-pleasing, box office hit.

His latest film, “About Last Night” follows in the footsteps of previous Hart films and goes to show that if something is not broken, then do not fix it.

Although short in stature, Bernie is not short on game or confidence.

He meets Joan (Regina Hall) in a bar one night and the chemistry is electric from the get-go.

In typical guy fashion, he tells his boy Danny (Michael Ealy) all about last night and Joan’s skills in the bedroom.  Likewise, Joan fills in all of the details for her girlfriend Debbie (Joy Bryant).

The new twosome decides to meet in the club the next night, and they want Danny and Debbie to join them for the evening.

From the jump, it is obvious that opposites not only attract in relationships, but in friendships as well.

Joan is professional, but in a loud, ghetto sort of way.

However, her best friend Debbie is a somewhat reserved, homebody who has given up on love it seems.

Likewise, Bernie does not lack for confidence in any way.  He is loud and boisterous, which is the complete opposite of Danny who has not dated in over a year after his break up with Allison (Paula Patton).

Their “blind date” with Bernie and Joan turns into the worst date ever because of the shenanigans of their friends, but when Danny decides to walk Debbie outside sparks start to fly.

After a one-night stand, Danny and Debbie quickly decide to move in together.  While their relationship initially grows, Bernie and Joan’s relationship fizzles and their unhappiness begins to have a negative effect on their friends’ relationship.

While Danny and Debbie represent the “normal” relationship, Bernie and Joan’s eccentricities provide “About Last Night” with its flavor and personality.

After hooking up on their first night together, Bernie receives “special attention” (in my Bernie Mac voice) from Joan, but is not a fan of returning the favor.

They play rock, paper, scissors in the bedroom to see who will get on top, and when Joan wants Bernie to meet her parents, he responds that he cannot do that because he is Jewish and she is not.

Ultimately, “About Last Night” is about finding the right relationship and what can happen when you move too fast and listen to too much bad advice from friends.

Most of all, “About Last Night” is about Hart and his ascendancy to the top of the comedy game.

His films may be formulaic, but his talent and ability to make people laugh is definitely a totally new and unique formula, and Hollywood is the better for it.