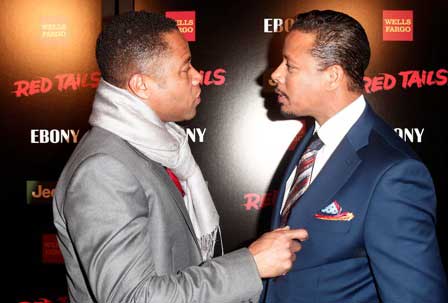 Nevertheless, the Red Tails movie directed by newcomer Anthony Hemingway and executive produced by George Lucas attempts to flip the script on the Black condition, by focusing on the heroism of Black men and not the plight of Black men.

Academy Award winning actor Cuba Gooding, Jr. told Regal Magazine: “If you think (about the negativity of the Black experience) when you are deciding on whether you should see the movie or not, then we failed because the objective from George Lucas was to make an action movie for young boys.  And I feel like he succeeded because I was blown away by the visuals in this film.

“That being said, he’s very focused on making sure that their legacy is still upheld…but let’s not get it twisted, when you come to see (Red Tails), it’s an amusement park ride and if you learn something about the Tuskegee Airmen, then that’s even better.”

Regardless, no one will confuse the triumphs of the Tuskegee Airmen to be anything close to an amusement park ride for the soldiers who were treated like second-class citizens during World War II, but still performed like heroes in the skies of Europe.

Terrence Howard told Regal Magazine that other films focused more on the civil rights issues encountered by the Tuskegee Airmen, but Red Tails focuses on the exploits. He said that it was exhilarating sitting in those planes and re-enacting the heroics of his forefathers, who beamed with pride while watching the film Red Tails for themselves.

And although many younger African Americans view the Civil Rights Movement as an antiquated time period, actor Nate Parker stated that there are definite parallels between World War II in the 1940s and 2012.  Parker said that we are still fighting abroad and there is still a huge disparity in wealth in this country and the exorbitant amount of black and brown faces within then prison industrial complex.  Nevertheless, the strength that the Tuskegee Airmen used to conquer inequality is the same strength that is needed for men of color today.

“There’s no obstacle that can be put in front of me that I can’t knock down and these men embodied the excellence that achieved those things,” Parker said.

And what Lucas and these wonderful actors achieved in Red Tails is pure excellence that should resonate throughout Black Hollywood for years to come, and that is creating a film with Black action heroes, that should bring all of us closer together as a community.

“I hope this film continues to help bridge the gap for us as a community and helps us come together,” Hemingway told Regal Magazine.  “I think the lessons instilled (are) that we’re more alike than different.  It’s something that is easily forgotten.”

However, with films like Red Tails, the exploits of our real heroes will never be forgotten, and will hopefully live on in the dreams of the youngsters that Lucas and all of those involved in the film dream to inspire.