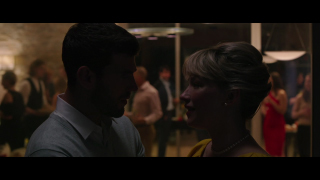 A Few Back Chapters

Although Ne-Yo talks dismissively about those back chapters, the movie “Swallow” shows that couples cannot turn the page to their future if people do not go back and address the negative things that occurred to them during those back chapters of life.

In “Swallow,” Hunter Conrad (Haley Bennett, “The Magnificent Seven”) seems to have it all.

Although she did not grow up with a silver spoon in her mouth, thanks to marrying up in class to Richie (Austin Stowell, “Bridge of Spies”), she now has as many silver spoons as she desires.

But despite the appearance of wealth and glamour, material things and a lifeless marriage can never mask the pain of a troubled existence.

In “Swallow,” Hunter is about to lose her mind although she appears to be cool, calm and collected at all times.

While her husband’s star rises in his father’s company, Hunter is left alone to play house in their palatial mansion on a daily basis.

It seems as if Hunter cannot wait for Richie to get home from his job as the newly promoted, and youngest ever, managing director at his father’s company just to have some company in her own house.

Richie has everything he can imagine.

His parents even bought the mansion that he shares with his wife.

But the one obvious thing missing in Richie and Hunter’s home is apparent from the beginning of “Swallow.”

The couple has everything they could want materialistically.

But they have no passion, romance, excitement or outward appearances of love.

The couple has the dullest marriage ever seen on film.

Regardless, there is nothing romantic about their romance or marriage.

Hunter is a wife in name only it seems.

While Richie and his parents discuss work and Richie’s childhood, when Hunter begins to speak, people either cut her off or fail to hear her in the first place.

Hunter has to crunch loudly on ice at an upscale restaurant to get her husband and in-laws to even notice her sitting at the table with them.

However, her lack of attention soon turns to attention when Richie announces to his parents that they are pregnant.

But while Hunter begins receiving more attention because of the pregnancy, her life as a housewife still bores her to death, almost literally.

In “Swallow,” Hunter begins ingesting objects in the home for no reason.

Hunter swallows marbles, thumbtacks and any object she can get her hands on, even if the objects are extremely sharp.

Not only does Hunter’s fascination with swallowing objects put her life in danger, it also puts the unborn baby’s life in danger.

The mother-to-be even has traces of blood and damp spots on her dress from trying to wash it off during social gatherings at her house.

Nevertheless, the baby seems unharmed by Hunter’s self-destructive behavior as her belly continues to grow.

But when many foreign objects appear at her ultrasound, Hunter is rushed into emergency surgery where her secret battle with pica disorder is revealed to her husband and in-laws for the first time.

NationalEatingDisorders.com describes pica as “an eating disorder that involves eating items that are not typically thought of as food and that do not contain significant nutritional value, such as hair, dirt, and paint chips.”

But why would someone cause intentional harm to himself or herself by eating dangerous objects that could take their life or the life of their unborn child?

However, Ne-Yo sang that everyone has a few back chapters.

Those back chapters can sometimes explain a person’s behavior, for better or worse.

Many people probably do not hurt themselves if there is not significant trauma in one of those back chapters.

But couples are supposed to know everything about their mate, the good, the bad and the ugly.

However, if one is not an open book or the book is sometimes checked out, it is hard to get the entire story about a person’s life and/or their behavior.

Unfortunately for Richie, Hunter has not always been the open book that he thought she was.

Information that Hunter should have shared with Richie when they began dating does not become common knowledge until they begin planning their family.

But can a family even become a possibility if Hunter keeps harming herself?

And can the marriage survive with the added stress of Hunter’s pica eating disorder?

The film “Swallow” survives a rather lackluster start because of all of the details of Hunter’s back chapters.

People have a way of masking their pain and hiding their true identity.

A person thinks they know their spouse and they do not really know them at all.

Furthermore, people sometimes think they have everything they could desire from a spouse because that spouse looks good on paper.

However, wealth and accomplishments do not stop people from being jerks or verbally and emotionally abusive to their mate.

But “Swallow” shows how a person can overcome their haunted past by confronting the problems from their past.

And although “Swallow” is not great, it will give moviegoers enough mentally to digest.

The question is can this particular couple in “Swallow” survive the back chapters when those chapters are so troubled in the first place?