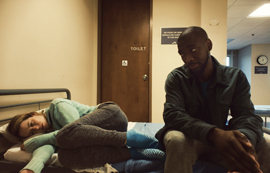 Second Time Around Not Always As Good As First

In 1979, R&B group Shalamar sang that the second time around is always better than the first time when it comes to love.

Unfortunately, Shalamar’s theory on love is not always the truth when it comes to cinema.

Although the film “Unsane” is chilling and edge-of-your seat suspenseful, it does not measure up to films with similar storylines like “Shutter Island,” which featured Academy Award winning actor Leonardo DiCaprio (“The Revenant”).

In “Shutter Island,” DiCaprio played Teddy Daniels, a U.S. marshal investigating the disappearance of a murderer from a mental hospital.

The only problem with Teddy’s investigation is that he is not really a U.S. marshal.

He is actually a patient at the aforementioned mental facility.

In “Shutter Island,” the healthcare workers at the mental hospital play along with Teddy’s delusions.

However, in “Unsane,” no one really believes Sawyer Valentini (Claire Foy) when she pleads that she does not need to be committed into a mental facility.

She voluntarily goes to a counseling session at the facility as she deals with issues like depression and anxiety.

The troubled young lady left Boston and moved to Pennsylvania to distance herself from an obsessed stalker.

She attempts to live a normal life, working in corporate America at a bank.

Her boss loves her, probably too much.

She even begins online dating, preferring hookups to long-term relationships.

Nevertheless, she struggles with the pressure of being so far away from her mother and the fear that her stalker might show up any day, if he is not already in Pennsylvania watching her every move.

And when she starts to get accustomed to the facility, her stalker mysteriously gets a job at the facility, despite Sawyer’s restraining order against him.

Her stalker has even taken on the identity of someone else; not going by is real name.

Or is everything a figment of Sawyer’s imagination and just proof of her need for mental health help?

As Sawyer’s pleas become violent, her time at the facility only increases.

Sawyer’s predicament could put herself and her family in dangerous harm if her accusations are correct.

“Unsane” is a pretty dope movie, but when compared to its predecessors, it doesn’t quite measure up.

That assessment is not a knock on “Unsane,” just a realization that movies like “Shutter Island” seemed more groundbreaking than “Unsane.”

He befriends Sawyer, but with her mental health history, is that really a wise decision?

“Unsane” is a testament to Pharaoh’s versatility as an actor.

Pharaoh is not on Eddie Murphy, Mo’Nique or Jamie Foxx’s level, but he proves that he can crossover and be equally as good in a dramatic role as he can be in comedy like those that came before him.

However, Pharaoh naturally injects some of his trademark humor into the dramatic role.

It will be good to see Pharaoh explore dramatic acting again to see if the second time is even better than his “first time” in “Unsane.”