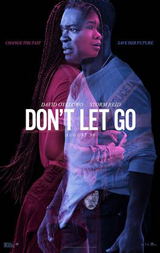 Over the last few years, movies with a predominantly African-American cast have taken a turn in the right direction.

As a result, moviegoers now get Black psychological thrillers like “Don’t Let Go” that are equal parts heavy (as in deep), dark, mysterious, bizarre and wild and possibly something that moviegoers have never witnessed before.

Like in so many dysfunctional families, Jack (David Oyelowo) has no biological kids.

But Jack has to take on the parental duties for his favorite niece Ashley (Storm Reid) because his brother and sister-in-law live a lifestyle that is not conducive to raising a young child.

When Ashley’s parents drop her off at the movie theater, they forget to pick her up.

As a result, Jack has to often leave his work as a police officer to make sure that his niece is safe and sound.

The relationship between Uncle Jack and Ashley is more father-daughter than uncle-niece.

As a matter of fact, Jack bought Ashley a cell phone just so that she can contact him in the case of an emergency or even if she just wants to vent.

Despite his fatherly role in Ashley’s life and his work as a police detective, Jack cannot be in all places at all times.

Sometimes, work takes precedence over everything, even family.

Therefore, when Ashley and Jack have their last real conversation in “Don’t Let Go,” he cuts the dialogue short because he is swamped with police work.

Ashley understands the rigors of Uncle Jack’s job though; therefore she respects his space and time.

But when tragedy hits too close to home, Ashley has no choice but to reach out to Uncle Jack, even if it interrupts his busy schedule.

Ashley calls Jack one last time in a panic, screaming for her favorite uncle to help her.

However, the phone call eventually drops.

And when Jack tries to call Ashley back on her cell phone, it goes straight to voicemail.

Unable to get in contact with his family, Jack decides to go to his brother’s house to check on things.

What he finds is something that no family member should ever experience.

All three of his family members, his brother, sister-in-law and Ashley have been murdered, execution style.

Even the family’s loving dog could not escape the wrath of the unknown murderer or murderers.

Like any loved-one, Jack begins to question himself and the decisions that he made leading up to the triple homicide.

He confides in his colleague Bobby (Mykelti Williamson), admitting that if he had not been so short with Ashley and took the time to talk with her over the phone, maybe he could have saved her life and the lives of his brother and sister-in-law.

At the triple funeral, Jack is in a total daze as his friend Bobby sits next to him in support.

Jack tells Bobby that he wishes that he could go back and do everything differently with hopes of reversing the outcome.

He hopes that he is simply living a nightmare.

Unfortunately, he is in reality and his family members are truly gone.

Nevertheless, he still yearns to go back and redo the events that led to the heinous triple murder.

Although his superiors want Jack to take some time off or maybe even see a psychologist to deal with a possible case of post-traumatic stress disorder (PTSD), Jack is obsessed with solving the case of his murdered relatives.

While working on the case, Jack begins getting phone calls from Ashley’s phone number even though he knows that she is dead.

Is it the killer taunting him?

Is it some kind of network problem with the cell phone carrier?

Or is Jack really battling PTSD and losing his mind?

When Jack returns to the crime scene, he realizes that Ashley’s phone is still in the house and obviously not in the evidence room.

So who is calling him from Ashley’s phone number?

When he finally builds up the nerve to answer the calls, he realizes that the person on the other line sounds like Ashley.

But how is that possible?

But when he realizes that it really is the deceased Ashley contacting him, it freaks Jack out to say the least.

It also freaks Ashley out too because Jack knows things that he should not know like the fact that there is a box under Ashley’s parents bed and the fact that Jack’s brother recently painted Ashley’s bedroom.

But reality then clicks for Jack.

He is in the present day and Ashley is in the past before the murder.

Somehow, they are talking to each other even though they are both in a different day and time.

But if Jack can talk to Ashley from the past, maybe he can stop the triple murder from occurring and/or determine who is responsible for the gruesome murders.

“Don’t Let Go” is something that moviegoers probably have never seen before.

And I do not understand might be words that come out of your mouth while watching “Don’t Let Go.”

But when watching, keep in my mind that Jack has the ability to live in the present, talk to his niece in the past, which could ultimately change the future for the entire family.

Wouldn’t you like to be able to communicate with someone close to you and tell him or her how their future decisions will affect the whole family?

By doing so, you could help them eliminate costly mistakes that cannot be undone once they are set in stone.

“Don’t Let Go” shows how unique and scary that ability would be.

Unfortunately, many moviegoers will not fully understand “Don’t Let Go.”

The movie might have to be seen multiple times to fully grasp the concept.

But one concept is not hard to grasp.

The concept that Black movies can only be one thing is a thing of the past thanks to movies like “Don’t Let Go” and others.