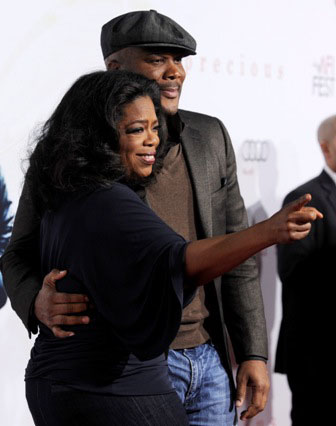 While the smash hit film Precious is as deep and gritty as a film drama can get, the novel upon which the movie is based is even more intense as it explores the intricacies of a violent mother-daughter relationship.

Originally entitled Push, the award-winning novel was written in 1996 by the novelist simply known as Sapphire. Precious tells the story of an obese, dark-skinned, illiterate African American girl who has survived two pregnancies by her father—the first resulting in an infant with Down’s Syndrome—and the horrific abuse heaped upon her by her mother, Mary.

The mother-daughter relationship is mostly lopsided. Mary, the most violent, spends most of her time smacking her daughter around and shouting orders and insults at Precious from her well-worn recliner. In order to enact revenge on Precious for having been raped by her father, Mary kicks her daughter in the head as she gives birth to her first child on the floor of their apartment.

Precious is the quintessential story of a dysfunctional family whose father—although mostly absent—is the catalyst for all of the hostility in the mother-daughter relationship between the girl and woman left behind. When the father impregnates Precious twice, her mother Mary tells a social worker that there was nothing she could do to stop him if he preferred her daughter as a sexual partner.

This continued abuse by the father created an irreparable chasm in the mother-daughter relationship as Mary became resentful of her daughter not only as a financial burden but also as a sexual adversary.

The father is seen only briefly in the beginning of the film as he has sex with the adolescent Precious, telling her that she is a better sex partner than her mother. This is what initially puts the mother-daughter relationship at odds.

In both the book and movie, Precious experiences some guilt because she begins to enjoy the sex with her father, but knows she is also betraying her mother. Her father disappeared after the birth of Precious’ first child, leaving her mother to blame her daughter for his absence in the household. Precious seems to blame all Black men for the turmoil she has experienced in her life, even down to the male schoolmates who taunt her and push her face down into the dirt and laugh at her expense.

The book begins with Precious revealing some shocking elements of her pitiful young life:

“I was left back when I was twelve because I had a baby for my fahver. That was in 1983. I was out of school for a year. This gonna be my second baby. My daughter got Down Sinder. She’s retarded. I had got left back in the second grade too, when I was seven, ’cause I couldn’t read (and I still peed on myself). I should be in the eleventh grade, getting ready to go into the twelf’ grade so I can gone ‘n graduate. But I’m not. I’m in the ninfe grade.

I got suspended from school ’cause I’m pregnant which I don’t think is fair. I ain’ did nothin’!

My name is Claireece Precious Jones. I don’t know why I’m telling you that. Guess ’cause I don’t know how far I’m gonna go with this story, or whether it’s even a story or why I’m talkin’; whether I’m gonna start from the beginning or right from here or two weeks from now. Two weeks from now? Sure you can do anything when you talking or writing, it’s not like living when you can only do what you doing. Some people tell a story ‘n it don’t make no sense or be true. But I’m gonna try to make sense and tell the truth…”

In a recent interview, Sapphire said that she began writing the book in 1993 as she was working as a remedial reading teacher in Harlem. “I had the intense feeling that if I didn’t write this book no one else would.” The film’s title was changed from Push to Precious: Based on the Novel ‘Push’ by Sapphire, to avoid any confusion with the 2009 action film Push.

The author says that she encountered girls like Precious while teaching; overweight girls who didn’t fit into the confines of society’s unrelenting model of physical beauty. These girls were essentially “locked out” of the broader culture of which they yearned to become a part of.

For instance, in the film, these are scenes in which Precious dreams of walking the red carpet or appearing in music videos along with the “light skinned boyfriend” that she covets.

Sapphire received several proposals to turn her book into a film, but she turned them all down — including an offer from director Lee Daniels. But then she saw Daniels’ films Monster’s Ball and Shadow Boxer and reconsidered.

The film’s cast, most of whom are women, features Gabourey Sidibe as the title character, and Mariah Carey, Mo’Nique, Paula Patton and Lenny Kravitz in supporting roles. The film marks the acting debuts of Sidibe and Kravitz.

The film premiered to praise at both the 2009 Sundance Film Festival and the 2009 Cannes Film Festival under its original title of Push: Based on the Novel by Sapphire. At Sundance, it won the Audience Award and the Grand Jury Prize for best drama.

After the film’s screening at Sundance in February 2009, Tyler Perry announced that he and Oprah Winfrey would be providing promotional assistance to the film. Precious also won the People’s Choice Award at the Toronto International Film Festival in September.

Sapphire initially worried that allowing her novel to be adapted to film would reinforce negative stereotypes about the Black community and African American mother-daughter relationships. However, Sapphire said that times have changed since she wrote the novel. She said she wants the film to portray a greater understanding of girls like Precious.

Clemmons is a contributing writer for Regal Black Men’s Magazine.