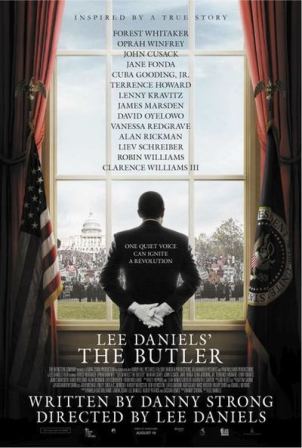 The actor portraying Dr. Martin Luther King, Jr. (Nelsan Ellis) in “Lee Daniels’ The Butler” stated that Black domestics played a vital role in the African American struggle.  They dispelled many stereotypes by displaying the hard work and trustworthiness that prevailed throughout the Black community in the early decades of the 20th century.

That struggle and ultimate triumph can be summed up in the story of Cecil Gaines (based on the real life story of Eugene Allen), played by Academy Award winner Forest Whitaker, who parlayed a life of servitude in the segregated hotels of the South to decades of service to a country that only viewed him and others like him as subservient help.

Before they were even born, their lot in life was already predetermined by Jim Crow laws and dire poverty.

Young Cecil (Michael Rainey, Jr from the film “Luv”) grew up in Macon, Ga. in the 1920s.  He witnessed his mother Hattie Pearl (Mariah Carey) being raped by a White overseer and he saw his father Earl (David Banner) murdered in cold blood for standing up for her honor.

After his father’s death, the White matriarch who the Gaines family worked for, took Cecil under her wings and taught him how to be a good “house nigger.”

However, knowing that Georgia racism might lead to his own death, he eventually makes his way to North Carolina, where his mentor Maynard (Clarence Williams III) recommends him for a job as a butler at the White House.

Maynard not only teaches Cecil the art of being a butler, but the significance of having pride in his Black heritage.  He admonishes Cecil for referring to his own people as niggers, explaining that nigger is a White man’s word and it is filled with hate.

That pride enables him to tolerate subpar treatment and subpar pay while at the White House.

Furthermore, the respect that Cecil eventually commands from the presidents and their families allow him to be a witness to history and participate in history from the Eisenhower Administration to the Reagan Administration.  As a result, moviegoers are witness to a masterpiece from Daniels and his actors.

President Dwight Eisenhower (Robin Williams) converses with Cecil even though the help was supposed to be invisible, and even young Caroline Kennedy (Chloe Barach) comes to Cecil when she wants to know about the Freedom Riders.

“Lee Daniels’ The Butler” shows the pride that older generations had in a distinguished job like butler at the White House, and the shame that the younger generation like Cecil’s son Louis (David Oyelowo) has for seeing his people subservient to Whites.

In “Lee Daniels’ The Butler,” the director interjects actual historic photos and news footage with the story of Louis who joins the Civil Rights Movement as a college student at Fisk University.

The actors tasked with the monumental assigment of portraying the presidents even rise to the occasion despite the challenge.  The actor portraying President John F. Kennedy (James Marsden) even sounds like JFK while addressing the nation via television.

In addition, Oprah Winfrey is brilliant in her portrayal of Cecil’s wife Gloria.  The role humanizes the iconic media mogul as we see Winfrey as the disgusted, drunk and in good times dancing wife of such an unsung hero in American history.

The biggest challenge facing “Lee Daniels’ The Butler” is who should actually represent the film with Academy Award nominations.

Only one thing is missing from the film, which culminates with the election of President Barack Obama.

With all of the iconic pictures used in the film, a picture of Allen and President Obama’s meeting in the White House would be the most historic of all and it would have been great to see it in the film.

People like Allen chipped away at the stereotypes of African Americans with pride, dignity, and intelligence.  Because of their sacrifice, stereotypes did not keep President Obama from occupying the office that he so richly deserves.