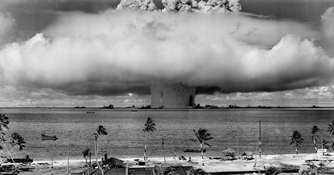 “Red Joan” depicts the race to create the atomic bomb in the 1940s.

History has a way of determining who is right and who is wrong.

However, sometimes right and wrong is not so black and white in the moment.

It is easy to now look at scared parents of the early 1980s who did not want their children going to school with HIV positive children as horrible people.

However, back in the early 1980s people did not really know how the diseased was contracted, so their ignorance was understandable.

No one knew how things would transpire with the development of this super bomb.

Therefore, what is obvious treason and betrayal of one’s country today, seemed like a good idea in the movie, “Red Joan.”

In “Red Joan,” Young Joan (Sophie Cookson) enters Cambridge University as a naïve and innocent student desperately trying to pursue her dreams of becoming a scientist.

At a time when many women stayed in the kitchen, Joan’s aspirations to become a scientist set her apart from other young ladies on the campus.

When a fellow scientist from another university meets Young Joan for the first time, he asks her, “Are you in charge of the tea?”

After a chance encounter with the more streetwise and rebellious Sonya Galich (Teresa Srbova), Young Sophia gets introduced to a different political ideology than what most British residents subscribed to.

Many of the students had become politically active because of Adolf Hitler’s murderous plans to take over Europe and create a dominant and master race.

Sonya introduces Young Joan to her cousin Leo Galich (Tom Hughes) who is a local leader of the Communist Party with sympathies to the government of the Soviet Union.

Leo is a German who detests Hitler’s regime and believes Communism is the means to eradicate dictatorships.

Joan is a brilliant science student.

However, she is new to the world of politics and is easily influenced by Sonya and Leo.

When Young Joan is hired to work on a super bomb for Great Britain, her new job and new relationship with Leo puts her in a precarious predicament.

Leo desperately wants to know the ins and outs of Great Britain’s research into the atomic bomb.

However, divulging that information to anyone foreign or domestic would violate the Official Secrets Act and basically guarantee prison time and national shame.

And although Leo and the Soviets are British allies in the fight against Hitler, there is no guarantee that they will remain allies after World War II concludes.

More importantly, if the good guys do not beat Hitler and the Nazis to the atomic bomb, humanity, as it had been known to that point might cease to exist if the world falls under Hitler’s power.

Therefore, sharing secrets with a potential enemy might come to bite Great Britain in the butt.

As a result, the country has very strict rules about who can view the classified information that they are working with to create their version of the super bomb.

When the United States, under President Harry S. Truman, successfully detonates an atomic bomb in New Mexico as a part of the Manhattan Project, the success leads to excitement and anxiety.

Knowing that Young Joan is privy to British secrets, the young scientist begins getting even more romantic overtures from men with political leanings that might not benefit Great Britain.

Because Young Joan does not know the true intentions of all of her friends, she has to remain cautious of anyone she puts her trust in.

Putting trust in the wrong people could lead to a worldwide catastrophe.

However, keeping the bomb secrets could lead to even more wars from a world getting torn apart by violence and oppression.

The atomic bombs detonated by Americans in Japan resulted in the loss of tens of thousands of innocent people.

Therefore, keeping the bombs in the hand of only a few countries could lead to more deaths.

But if every country possesses the atomic bomb maybe countries would be more apprehensive about using it.

Ultimately, Young Joan’s decision as a college student will have an impact on her life for many decades to come.

“Red Joan” is not the most intense movie.

It actually comes across dull at the beginning.

However, any film with Judi Dench already boasts of some of the best acting possible.

The veteran actress masters the role of the stereotypical elderly lady who has lots of secrets to hide, which is true of many people from that generation.

Many people from previous generations kept family secrets from their children.

A lot of people from the “Greatest Generation” went to their grave hiding some of the atrocities that they experienced from their children and grandchildren.

While many people from younger generations viewed their parents and grandparents as model and moral citizens, many had a dark side that they kept behind closed doors.

As the saying goes, family business stays in the house.

But what happens when family business is actually national security business?

That is the predicament Joan finds herself in the film, “Red Joan.”

Dench plays Joan as an elderly woman who has to come to grips with her decisions as a green college student.

By listening to the political leanings of her friends, green or naïve Joan becomes known throughout Great Britain as “Red Joan.”

Besides Dench’s emotional performance, “Red Joan” is the quintessential period piece, capturing the style, fashion and fear of 1940s Great Britain to a “T.”

Nevertheless, “Red Joan” gets off to an extremely sluggish start without a lot of drama.

The drama of “Red Joan” does not get cooking until about 30 minutes into the film.

But when “Red Joan” does get going, one begins to empathize with the decisions that Joan made.

Additionally, “Red Joan” does a good job of getting the peripheral history right as it pertains to the superpowers of the world racing against time to beat their adversaries and temporary allies to the atomic bomb.

And while “Red Joan” is not “the bomb,” it is a halfway decent recollection of history and how we cannot judge all of those who found themselves on the wrong side of history.

Because after all hindsight is always 20/20.