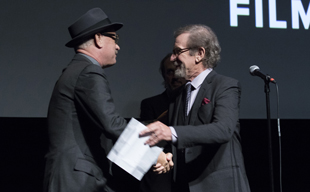 The Fifth Amendment of the United States Constitution reads that no one shall be deprived of life, liberty or property without due process of law.

However, do those same rights of due process transfer to non United States citizens?

Does due process apply at times of conflict like the Cold War or the War on Terrorism?

The Stephen Spielberg-directed “Bridge of Spies” does a marvelous job of juxtaposing our patriotic duty to protect Americans from all threats foreign and domestic, while adhering to the principles and laws that make our country so great and respected.

During the Cold War, espionage in America and the Soviet Union was as commonplace as white picket fences especially in the 1950s and 1960s.

Both governments encouraged the gathering of intelligence against their adversary in hopes of thwarting a nuclear attack.

Students often practiced hiding under their desk to protect themselves from a nuclear bomb.

And even the rumor of being a Communist in America led to ostracism and retaliatory violence.

In “Bridge of Spies,” when Soviet spy Rudolf Abel (Mark Rylance) is arrested in Brooklyn, N.Y. in 1957, Americans want him executed for his crimes against Uncle Sam.

No one sees the need for him to receive adequate counsel but the job is given to insurance lawyer James Donovan (Tom Hanks) because of that “dreaded” Fifth Amendment.

While his bosses just want Jim to represent Abel physically in court, Jim sees the need to provide adequate legal help for his client although he knows he has very little chance of winning on the trial or the appellate level.

Nevertheless, he continues to help Abel all the way to the United States Supreme Court, even if his “unpatriotic” work puts his family’s life in danger.

However, Jim sees the benefit of keeping Abel alive in jail and sparing him the death sentence because America is not totally innocent in the game of espionage either.

What if an American spy is captured in the Soviet Union?

If that were to occur, America would have something to bargain with in their negotiations to get that potential American back home and away from a lifetime of harsh treatment at the hands of our Russian counterparts.

“Bridge of Spies” is simply brilliant and is Hanks’ most important role to date.

The directing from Spielberg is magnificent and extremely expensive.

If there was not a nuclear arms race as the backdrop of “Bridge of Spies” the smoothness of the film from the jazz and classical music to the players with the slick suits and cigarettes could rival “Love Jones” and early scenes of “Malcolm X” in coolness.

Although a U.S. enemy, Abel also exudes coolness with his “would it help” attitude when others would be in fear of pending danger.

Despite the brilliance of “Bridge of Spies” some of the casting could have been better.

Although I am a fan of Domenick Lombardozzi (“The Wire”) his role as Agent Blasco is too similar to the role in “The Wire” that made him a star.

His hard East Coast accent is even the same as in “The Wire” even though it takes place 50 years earlier.

The only thing that looks 1950s is his hairstyle, which is less hip-hop-esque than it was in “The Wire.”

Regardless, “Bridge of Spies” is just as relevant today as it would have been if released in the 1950s or 1960s.

The Cold War is now the War on Terrorism and the race to gain intelligence from our enemies sometimes encourages us to disregard the same laws we claim to be upholding.