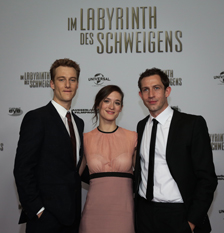 First, “Straight Outta Compton” with its harsh criticism of police brutality came out at a time when our country tried to grapple with the Black Lives Matter movement.

Next, “The Martian” rode the news of water on the red planet to box office supremacy.

In “Labyrinth of Lies,” Johann Radmann (Alexander Fehling) has to pay his dues in the business world like every young adult.

While his colleagues in the prosecution office get the juicy murder trials, he has to grit his teeth and work minor traffic cases.

However, when other lawyers in the office pass up on a case against German soldiers who worked the concentration camps during the Holocaust, which is brought to their attention by Holocaust survivor Simon Kirsch (Johannes Krisch), his colleagues’ trash becomes his treasure.

Johann begins uncovering the brutal and treacherous details of what went on at Auschwitz and which Germans had a role in the mass murders and torture of captured Jews.

Johann’s determination to see the Germans, who participated in Adolf Hitler’s evil atrocities, makes him and those around him the target of potential harm from their adversaries.

Although Hitler committed suicide and World War II liberated the surviving Jewish captives, many of the most vicious murderers went on with their lives in Germany like the Holocaust never happened.

The whole country is in denial about the Nazi regime, even Johann who refers to Simon’s captivity in a concentration camp as his “stay at Auschwitz” as if it were a luxury all-inclusive resort.

In “Labyrinth of Lies” what Johann’s efforts hopefully will do is expose those lies, and force history to remember the truth about what happened during the Holocaust.

“Labyrinth of Lies” is a powerful film about the revisionist history every country tries to write to sugarcoat its wrongs.

Americans see it with the absurd honoring of Christopher Columbus for discovering America, when Native Americans had been on the “new land” for centuries.

In addition, Americans see it with the sugarcoating of the enslavement of African-Americans, choosing to refer to them as migrant workers instead of property, which is how they were listed in the census.

And our German brothers and sisters did the same thing by totally trying to ignore the horrors of the Holocaust and Hitler’s evil regime.

The acting, by relative unknowns to American audiences, was on point from top to bottom.

Unfortunately, people that are not fond of foreign language films may not like the presence of subtitles throughout “Labyrinth of Lies.”

Subtitles notwithstanding, a good film is a good film regardless if it is in German or English.

And exposing the harsh realities of history needs a platform in today’s society so we do not get blinded by the onslaught and constant attacks of those who want to revise the realities of our troubled history.