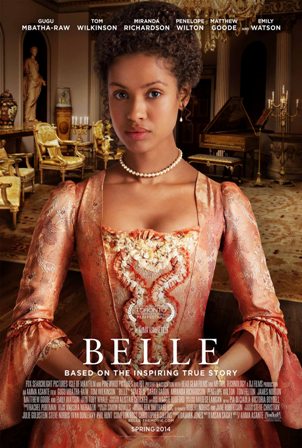 Dido (Gugu Mbatha-Raw) does not quite belong anywhere.

Too high in rank to fit in with most people her color, unfortunately she is also too dark to equal in rank with people in her socioeconomic class.

The mixed-race beauty is the product of African slavery and English nobility.

When her mother dies, her father, a Royal Navy Admiral, rescues her from the slums of Great Britain to live with his aristocratic uncle and her White cousin.

He does not see the color of his daughter’s skin, just the apple of his eye like any father would despite slavery being the lot for most with the same lineage.

After the untimely death of Dido’s father, her predicament becomes even murkier.

She inherits 2,000 pounds per year from her father, which makes it even harder for her to find a spouse and a meaningful life.

Her cousin Elizabeth (Sara Godon) is also being raised by their uncle, but unlike Dido, finding a husband is a necessity because her father abandoned her and left her without an inheritance.

Unfortunately, her financial predicament makes it difficult for her to marry up in class because she has very little wealth to contribute to a marriage.

Despite her uncle’s efforts to give Dido a charmed, carefree and unmarried life, her beauty and brains make it hard for her to stay confined to the rules of English nobility.

She captures the eyes of two British gentlemen.

However, he is the second son and left without any inheritance, making Dido question the desire of him and his family.

John Davinier (Sam Reid) is Dido’s equal in more ways than one.  He sees no color or class, just human beings.

However, he is the son of a clergyman and not cut from the same cloth as the members of Dido’s family like her uncle, the high court judge Lord Mansfield (Tom Wilkinson) and her aunt Lady Mansfield (Emily Watson).

Complicating matters between Dido and Mr. Davinier is the fact that he is a legal apprentice to Lord Mansfield and does not share his view on slavery and a pending lawsuit that the judge is deliberating over.

Davinier finds it morally repulsive to own another human being, while Lord Mansfield seems all too comfortable with the status quo.

Because of the case, Dido begins to truly see her position in society, or lack thereof.

She is not good enough to sit at the family dinner table when company comes over, although her family says they love her like they love Elizabeth.

Dido is not a slave, but has to deal with the fact that Mabel, who looks more like her than her own family, is her servant and given none of the luxuries that she enjoys.

Furthermore, if Lord Mansfield is perfectly OK with enslaving people of color, how does he truly feel about his niece?  As Davinier informed Lord Mansfield, Dido is not a slave only by the grace of God.

“Belle” is a refined and elegant film with brilliant acting, effortless charm and perfect casting.

The film does a good job of capturing the conundrum that many people of African descent found themselves in for generations.

Only by the grace of God did they not suffer the same fate as their “brothers” and “sisters.”

As a result of their socioeconomic clout, education and/or fair skin they did not have to suffer the harsh realities of their darker, less educated and less affluent brethren.

One part of their heart has to love the luxuries that they are afforded, but how can one be overly joyous when they could have been so easily less fortunate and victimized even more by the cruel hand of oppression?

Mbatha-Raw does a masterful job of portraying how complex and raw human emotions can be when one’s reality represents both ends of society’s social spectrum.

Nevertheless, “Belle” should have extended even further to discuss how mixed-race couples in Great Britain were treated, especially in the age of slavery and how the couples responded to country’s treatment of them.