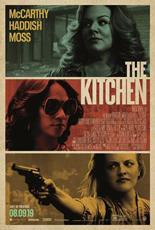 If You Can’t Stand The Heat, Get Out of the Kitchen

Many people criticize Hollywood’s infatuation with stories of the gangster lifestyle.

Some say that gangster movies and music promote the gangster lifestyle by glamorizing it.

But if one looks closely, movies like “The Kitchen” do not necessarily glorify the gangster lifestyle, instead these films show just how brutal and unattractive a life of unorganized crime can really become.

And while “The Kitchen” does not quite measure up to a similar tale from “Widows” starring Viola Davis it shows that women can be just as heartless and cold when it comes to obtaining power and wealth.

All of their lives, people taught those aforementioned women to become good wives, good mothers and good housekeepers.

Probably never did anyone persuade them to attend college, pursue their own dreams or create a livelihood for themselves independent of their husbands.

While some stay-at-home wives survived the old school marriage arrangement because their husbands had good jobs with benefits and pensions, what happens to the wives of those working in the streets?

Organized crime does not provide a retirement or workmen’s compensation.

Therefore, if something happens to their husbands, the wives are up a creek without a paddle because providing for their children without income is totally impossible.

Little Jackie (Myk Watford) who runs the Irish Mob in the Hell’s Kitchen neighborhood of Manhattan, N.Y. vows to take care of Claire, Ruby and Kathy.

However, the money that Little Jackie gives them amounts to nothing more than an allowance and not a livable income.

Little Jackie begins to make enemies in the suddenly single women who find themselves alone when their husbands’ latest caper goes awry.

Additionally, Little Jackie begins making enemies out of his Irish brethren in Hell’s Kitchen who own businesses in the neighborhood.

But the tribute is not just extortion.

The tribute should also provide protection for the business owners from the thugs looking to take advantage of their businesses by stealing and other crimes.

And although some business owners pay, many have refused payment because Little Jackie stops protecting their interest.

When the ladies hear of the predicament of the business owners, they see an opportunity to take over their husbands’ criminal enterprises by making good on the protection and other services that the Irish mob should supply to Irish-owned businesses.

But “The Kitchen” begins with a cover version of James Brown’s classic song “It’s a Man’s Man’s Man’s World,” which signifies that men like Little Jackie will not take the new hierarchy sitting down.

Very few men in 1978 would feel comfortable taking orders from a woman.

And probably even fewer would just accept a woman strong arming them for their entire business without putting up a serious fight.

But just because a man wants to fight a woman, does not mean that particular woman will become docile and not fight back.

In “The Kitchen” the women fight back and the movie becomes a true battle of the sexes.

“The Kitchen” is worth the price of admission.

Many people will see it more than once and deservedly so.

McCarthy had already begun showing her dramatic acting chops before “The Kitchen.”

But for Haddish, “The Kitchen” will show her fans how truly diverse her talents are in the acting game.

Some have said that Haddish is not that good of a standup comedian like a Mo’Nique or Adele Givens.

Haddish might not even have the dramatic skills as the Academy Award-winning Mo’Nique.

However, Haddish has a combination of both and she knows her talents and limitations.

The star that made a name for herself on the sitcom “The Carmichael Show” knows that she is one of the best comedic actresses in the game.

Now, “The Kitchen” shows that Haddish has the ingredients to spread her talents in the dramatic arena.

When watching Haddish in “The Kitchen,” think of Kevin Hart’s dramatic performance in “The Upside.”

“The Upside” allowed Hart to spread his wings dramatically despite the fact that he told RegalMag.com years earlier that he had no intention of veering off into other lanes of Hollywood.

Nevertheless, Haddish’s performance as Ruby is more sinister than any of Hart’s performances on the big screen.

Haddish channels her inner Bishop (Tupac Shakur) from “Juice” when she finally tastes a little power and gets seduced by the violence of the street.

Unfortunately for “The Kitchen,” it does not quite measure up to 2018’s “Widows.”

The acting in “The Kitchen” is darn good.

But very few actors or actresses can measure up to Davis these days, and “Widows” benefits from having Davis in the starring role.

But both “Widows” and “The Kitchen” have their twists, turns and surprises.

The twist in “The Kitchen” will come from left field.

When it comes to the plot twist, think of one of Common’s songs, which is appropriate since the Chicago rapper-actor plays Gary Silvers in “The Kitchen.”

And the recent twist on gangster movies will have fans of the genre salivating over the latest Hollywood infatuation, women mobsters.