Review: ‘Sin City: A Dame to Kill For’ Only Has Killer Graphics 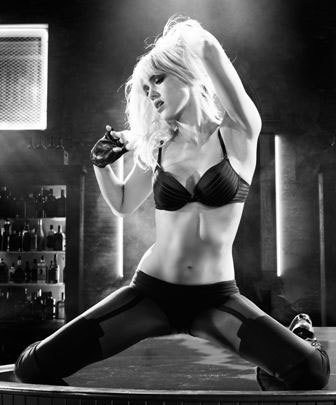 Jessica Alba is even sexy in black and white in "Sin City" (Photo Credit: Rex Features via AP Images).

All of the aforementioned words and adjectives accurately describe “Sin City: A Dame to Kill For,” but that does not necessarily equal a good result at the end of the day.

Based on the “Sin City” graphic novels, filmmakers Robert Rodriguez and Frank Miller bring those beautiful graphics to life like no other, but still struggle with a bad script, which consists of too many variables to tell an effective story.

But like many hustlers soon discover, when you hustle the wrong hustler you often find yourself on the wrong end of that hustle.

Despite the advice of others, he beats the pants off of Senator Roark (Powers Boothe) in a card game.

To many, this would not even pose a problem, but for somebody as image conscious as Senator Roark, defeat at the hands of anyone, especially a smart-mouthed brat, could lead to a loss of power and control, something he is not willing to concede.

Johnny’s slight to the senator puts everyone’s life in jeopardy, from his own life to that of innocent women.

Ava (Eva Green) is truly the baddest chick not rap star Trina.  And the way that men lose their minds after tasting the sweet nectar of her fruit, proves that she really has the “ill na na,” not rap icon Foxy Brown.

Eva always wanted to be some rich man’s wife.  As a result, her former lover Dwight (Josh Brolin) became just that (a former lover) because he did not have the means to support her lavish desires.

Although she did him terribly wrong when they dated, he still falls victim to her sweet seduction and tales of heartbreak.

When she tells Dwight stories of the abuse she faces at the hands of her husband Damien Lord (Marton Csokas), Dwight blindly responds to the situation that changes his life and others forever.

Manute (Dennis Haysbert) is her bodyguard.  She is “in good hands” with Manute whose job it is to protect her at the behest of her husband.  He is willing to die and kill to protect her honor.

Nancy (Jessica Alba) is a beautiful exotic dancer with a score to the settle with the senator. She watched a loved-one die because of him and vows retribution despite the pleas not to by Hartigan (Bruce Willis).

Most of the characters effectively interweave with each other throughout “Sin City: A Dame to Kill For,” but it is a little too busy of a storyline for one film.

The decision to shoot “Sin City: A Dame to Kill For” in black and white, with splashes of color was brilliant.

That look gives it the right mixture of sex appeal and gangster, which will definitely seduce moviegoers.

Miller does a marvelous job of allowing all of the characters to be narrators, which allows the film to not deviate too much from his novels.

Nevertheless, a beautifully shot film does not always equate to a beautifully executed film, and “Sin City: A Dame to Kill For” falls into this predicament.

Other filmmakers should follow Rodriguez and Miller’s example of a slickly made motion picture and marry it with a slicker storyline, which will result in a classic movie in all possible categories.