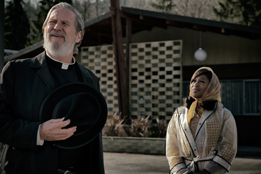 The hotel had rooms in both California and Nevada.

Many politicians and entertainers rested their heads at this unique venue for years.

To stay at the El Royale meant something back in the day.

Unfortunately, the 1970s and the 1960s represented far different times for the once magnificent lodging place.

Ten years after its heyday, the El Royale has seen it’s good times come and go.

The hotel deteriorated after it lost its liquor license in one of the two states that the hotel sits on, causing its profits to deteriorate as well.

However, the bad times produce one of the most original, unique and weirdly fantastic films in a long time.

In the process, a true multi-dimensional movie star rises from the ashes in Cynthia Erivo, who plays aspiring singer Darlene Sweet, and will also play the titular role in the upcoming Harriet Tubman biopic, “Harriet.”

Moviegoers will immediately know how bad the El Royale is when four guests receive the worst reception and service in the history of the hotel business.

Although the guests knock on doors, ring bells and even resort to making their own coffee because no one works at the hotel bar, the guests still receive no service from an employee at the hotel.

In “Bad Times at the El Royale,” the first guest to arrive is Laramie Seymour Sullivan (Jon Hamm, “Tag”), a salesperson that is sent to Tahoe, Calif. by his company on business.

Laramie’s company sells cleaning appliances like vacuum cleaners, and the way Laramie talks a mile a minute it is understandable why he is so good at his sales job.

However, he is the complete opposite of politically correct.

When an African-American lady, Darlene, shows up in the guest lobby, Laramie automatically assumes that she works in the hospitality business and tries to sell her a vacuum cleaner.

But when Darlene informs Laramie that she does not work in a domestic capacity, he shoots his sell pitch anyway because he assumes she has some friends that work in the hospitality business.

Father Daniel Flynn (Jeff Bridges, “The Only Living Boy in New York”) is a priest that cannot remember who he is or where he is half of the time.

Doctors have agreed with him that his memory loss is more serious than just forgetting a few things and he struggles to find his wits, even forgetting where he is while standing in the parking lot of the hotel.

He found his way west because he wants to reconnect with his brother, who he once shared a very close bond with.

Darlene has always wanted to sing.

She once had decent work as a background session vocalist.

However, the people that blew her head up and told her that she could become a star have all abandoned her, leaving her to take cheap singing gigs in Reno, N.V.

She chooses to stay at the run-down hotel because if she stays in the city limits of Reno, she will lose money instead of making money because the rooms are that much more expensive at the almost abandoned and dirty El Royale.

The most mysterious of the foursome is Emily Summerspring (Dakota Johnson, “Black Mass”).

Emily refuses to engage in small talk with the other guests, even with the chatterbox Laramie.

She refuses to sign her actual name on the hotel ledger.

And she appears to be extremely suspicious, especially when she moves her belongings into her hotel room.

Emily even carries a shotgun into her hotel room, which should raise red flags.

However, the hotel does not have enough staff to catch any suspicious behavior.

The El Royale has one employee, Miles (Lewis Pullman, “Battle of the Sexes”), and the way Miles does his job; the hotel might as well have no employees at all.

The only problem with the aforementioned character descriptions is that no one at the El Royale is who they seem.

All of them have dark secrets.

Everyone has their own separate true story that they are hiding.

No one is to be trusted.

Nothing is as it appears.

And no one will see the twists, turns or the conclusion coming.

Furthermore, a stranger named Billy Lee (Chris Hemsworth, “Thor: Ragnarok”) will show up with his own dark secrets and dark plans for the people at the El Royale.

Although Bridges, Hamm and Hemsworth are box office gods, a goddess reins supreme in “Bad Times at the El Royale” thanks to Erivo’s performance.

Her singing of songs by artists like Otis Redding, Sam and Dave and The Supremes provide “Bad Times at the El Royale” an authentic soundtrack without the need for playing the original tracks.

If the Motown era is your cup of tea, songs sung by The Isley Brothers and The Four Tops will really take you down memory lane.

Although the old school songs are strong, Darlene is even stronger.

The strength of her male counterparts actually pale in comparison to her strength, and Erivo is strong enough of a talent to soon have the same name recognition as her more famous co-stars.

Erivo has talents that take people back to the 1960s when stars like Diana Ross, Nat King Cole, Harry Belafonte and Earth Kitt could do it all from singing to acting to dancing.

Although times have changed in Hollywood since the 1960s, talent is still talent and Erivo has more talent in her pink toe than many so-called superstars and movie stars.

Erivo is a throwback talent that should one day receive legendary status like some of the icons from the 1960s that are still relevant in 2018.