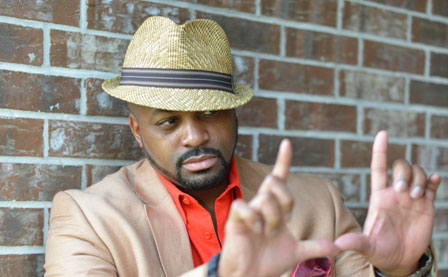 Filmmaker and actor Marcus Freeman has a vision of making universal films that all can relate to (Photo courtesy of Marcus Freeman).

The Bible verses James 2:14-17 state, “What does it profit, my brethren, if someone says he has faith but does not have works?  Can faith save him?  If a brother or sister is naked or destitute of daily food, and one of you says to them, ‘Depart in peace, be warmed and filled,’ but you do not give them the things which are needed for the body, what does it profit?  Thus also by faith by itself, if it does not have works, is dead.”

Filmmaker Marcus Freeman has the work ethic to match his faith and as a result has produced and directed a short film entitled “The Prank,” which has a universal theme of deception, grudges and guilt through his tireless fundraising efforts via social media and church involvement.

“It’s like this is a key to this door versus I need someone to build a whole door for me,” Freeman explained about his completed short film.  “I’m already at the door.  I have product.  I have a film.  I have something.  I have a message.  I have a good script.  Now, it’s taking that next step of someone seeing it…”

“The Prank” will be seen soon throughout the film festival circuit, and Freeman hopes his upcoming “dramedy” will catch the interest of other financial backers who will help get this film to the next level, possibly even a feature-length film.

“The Prank” centers on a group of high school classmates who reunite for their 15-year class reunion.  Almost instantly, the group of friends realizes something is amiss about their get-together and they are soon caught in an elaborate scheme of deception, the rehashing of old wounds and guilt trips.

Freeman’s film debut enters the scene at a time when Hollywood is very receptive to films, especially dramedies, with predominately Black casts, and the filmmaker sees that reality as both a positive and a negative.

The success of dramedies like the Tyler Perry films and the “Think Like a Man” franchise has shown the universal appeal of films with predominately Black casts, but the success of those films sets the bar very high for those filmmakers coming behind producers like Perry and Will Packer.

Furthermore, despite the universal appeal of many films with predominately Black casts and crews, many get the unfair label of being regarded as a “Black film,” which could unfortunately adversely affect its box office success and financial backing.

Freeman wants audiences, backers and others to not label “The Prank” as a Black film because at the end of the day it should not matter who is in the film, only that you leave the theater praising the film.

“I think what’s interesting about ‘The Prank’ is that, one, it’s universal,” Freeman said.  “Everybody can relate to it.  A lot of people may not know or be familiar with the movie ‘The Big Chill.’  Maybe something closer to them is more like ‘The Best Man,’ but it’s not like that.  It’s like ‘The Big Chill’ meets ‘Snapped.’  So, you got these two different genres coming together and they clash.  And who can’t relate to deception, grudges and guilt?  That’s so universal.”

Likewise, who cannot relate to someone who had a dream and used faith to get him or her close to the finish line of fulfillment?

His road to becoming a filmmaker did not require rocket science as he put it, just faith in Jesus Christ, intuition as an artist and family support.

Those same three elements also helped him rise from an artist with a dream to a respected actor, writer, producer and director thanks to his illustrious performing career at venues like the Ensemble Theater in Houston.

Working as an actor helps him because some of the best directors have an acting background, which helps them better communicate with their talent.

One actor that has helped in his development as a filmmaker and actor is Charnele Brown who starred as Kim Reese on the popular off shoot of “The Cosby Show” “A Different World” from 1988 to 1993.

Brown believes Freeman is unique as a director because “he’s an actor’s director.  He can relate to the actor being one himself.”

Despite the popularity of Black dramedies at the box office, Brown does not want “The Prank” to separate itself from the pack.  She believes that it is important that the audience is familiar with the story, and it’s the filmmaker’s job to keep them engaged throughout the story.

The veteran actress is very impressed with Freeman’s process with “The Prank,” but that process is not finished.

The process will be complete with the help of financial backers, the people who desire positive images from Hollywood and are willing to support it; the people who combine believe or faith with works like Abraham in the Bible.

James 2:21-22 states, “Was not Abraham our father justified by works when he offered Isaac his son on the altar?  Do you see that faith was working together with works, and by works faith was made perfect?”