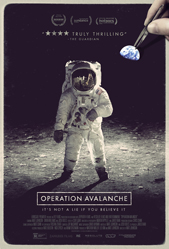 Conspiracy theories are not only usually false, sometimes they are far-fetched.

Over 50 years after man landed on the moon, many still believe that the moon landing was fictious and a Cold War ploy to make Americans look superior to their Soviet counterparts.

Nevertheless, being false does not always make for bad entertainment.

However, that does not prevent the CIA from hiring them as operatives.

Their first assignment is to determine whether filmmaker Stanley Kubrick is a spy working for foreign agents to sabotage America.

But when the dynamic duo discover that there might be a Russian mole planted at NASA to learn about America’s space program, the two convince their superiors to let them lead the investigation.

The CIA has plans to use scientists to sniff out the mole, but what if Matt and Owen are more convincing and less suspicious?

Matt and Owen use documentary filmmaking in their CIA investigations, and convincing the mole to trust in their naiveté would be easy for the two.

However, when they get the NASA assignment in Houston, they quickly find out that the moon landing will not be possible to complete in the 1960s.

Former President John F. Kennedy had promised a moon landing in that same city at Rice Stadium years earlier in an attempt to beat the Russians to the moon.

Now, it has become obvious that they will not have the necessary technology to accomplish this feat until 1971.

What Matt and Owen offer instead is a film that creates the illusion that the moon landing actually happened when it really did not.

Unfortunately, when they become too involved in CIA and NASA secrets all hell breaks loose.

“Operation Avalanche” stands out because it might be the first period piece that actually looks like it is shot during the time period in which the film takes place.

Filmmakers use old school 16-millimeter film to shoot the picture, which gives it an authentic 1960s vibe, and not just a film with 1960s clothes and cars but in high definition.

Additionally, the film includes elements of suspense and violence, which makes it appealing to the non-nerd variety.

But the film does make one wonder.

Although many conspiracy theories are false, some probably are true.

“Operation Avalanche” comes across like a 1960s version of the hit TV series “Scandal.”

And like conspiracy theories, most scandals will have a level of intrigue and entertainment about it.