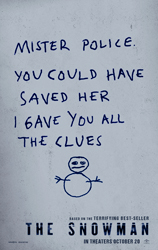 The abused sometimes grow up to become abusers.

Those who experienced violence as a child sometimes become violent adults.

And those who witnessed death sometimes choose to inflict death on others years later.

In the frigid wilderness of Norway, a young boy (Leonard Heinemann) lives a quaint and solitary life with his strange mother (Sofia Helin).

The only guest that comes by their residence is the boy’s Uncle Jonas (Peter Dalle).

Uncle Jonas visits the home to quiz the boy on his school lessons and when the boy gets an answer incorrect, the boy’s mother is physically assaulted by Uncle Jonas for not doing a good enough job preparing the boy for his studies.

The boy’s only escape from the violent household is to make snowmen in the blistering cold of Norway.

After the boy’s mother threatens to tell Uncle Jonas’ wife about their little secret, the boy’s mom eventually commits suicide, leaving the boy as an orphan.

Decades later, women are coming up missing in Norway.

The perpetrator taunts Norway police officers like Harry Hole (Michael Fassbender, “Steve Jobs”) with clues about the disappearances and how close the cops are to capturing the criminal.

In “The Snowman,” the perpetrator is even so brazen as to call in the crimes before he or she even commits the crime so that law enforcement officials will be confused as to what actually happened at the crime scene.

It is up to Harry and his partner Katrine Bratt (Rebecca Ferguson) to solve these disappearances before the snowman strikes again and again.

With all of the aforementioned traits, “The Snowman” should have all of the ingredients for a successful thriller.

Unfortunately, “The Snowman” suffers because it is mysterious but still mediocre and not interesting enough to keep the attention of moviegoers for an entire two hours.

The concept in “The Snowman” might have made for a decent short film but not a feature length film.

Furthermore, moviegoers will know early on whom the perpetrator in “The Snowman” is, making the conclusion extremely anticlimactic.

The struggles of “The Snowman” are not the fault of the actors but the fault of a script that is not interesting, scary or intense enough for a successful thriller.

With actors like Fassbender and Val Kilmer, the acting performances are as good as they possibly could be.

However, acting talent is not enough to push the film past average.

Nevertheless, the snow-capped scenery in “The Snowman” is absolutely breathtaking.

The icy visuals will even make audiences feel cold just looking at it.

Unfortunately, “The Snowman” never quite thaws out and audiences will find it difficult to stay engaged with this film.

And while weird often works in Hollywood, this film was a little too strange for its own good.

On the bright side, “The Snowman” is still not the weirdest film of 2017 by a long shot.

Nevertheless, “The Snowman” fails to capitalize on the solid backstory of how a serial criminal was created.

However, the potential that this film possesses only produces a mysteriously mediocre film.