Review: ‘Beyond the Lights’ Packs Message of Staying True to Self 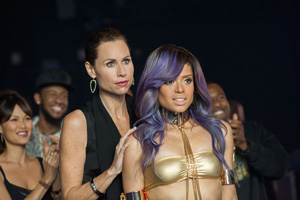 In a lot of ways “Beyond the Lights” represents the modern version of the 1993 classic television miniseries “The Jacksons: An American Dream.”

Macy Jean (Minnie Driver) began her family too early in life and the pressures of surviving during cruel economic times with little money drives her to want the best for her child.

Much like Jackson patriarch Joe Jackson, when Macy realizes her offspring has talent she pushes her to succeed in show business at all costs, whether or not it limits her growth as a person in favor of promoting a product, or whether it permanently fractures the parent-child relationship.

In “Beyond the Lights,” when a young Noni is crowned first runner-up to a tap dancer with no rhythm, Mama Macy makes her daughter trash the second place trophy.

Likewise, in “The Jacksons: An American Dream,” when the Jackson 5 lose a talent contest to the fictitious Indiana Diamonds, Papa Joe refuses to let his sons take home the second place price, a color television set.

Michael Jackson’s mother Katherine Jackson once told Oprah Winfrey that the family had a broken down washer and dryer when Michael was an infant and when it ran it rocked back and forth producing a distinct musical beat.  Katherine said an infant Michael would gyrate to the beat even before he could walk.

Furthermore, Macy says that Noni (Gugu Mbatha-Raw) would sing the melody of Nina Simone’s classic song “Blackbird” at seven months old, long before she could talk.

Although they were probably trying to give their children a better life and help them reach their potential, both parents spent more time as their offspring’s manager and not enough time being a mother or father and developing quality people, instead focusing on promoting a product or package.

While Michael probably never fully developed into the person God intended him to be, Noni is determined to be herself and have her own voice in this world and not simply be a commodity for the record label or her overbearing mother.

Noni finds her saving grace in her guardian angel, Officer Kaz Nicol (Nate Parker) who helps her find her voice despite the deafening noise of the Hollywood pressure.

Although it is hard to believe that a Hollywood diva would choose a police officer as her “partner in crime,” their union provides the balance that she needs.

He encourages her to “do her” and be herself; not an image created from hair extensions and fake fingernails.

Thanks to “Beyond the Lights” and “Belle,” Mbatha-Raw is continuing her upward trajectory to becoming one of Hollywood’s next it-girls.

She turns in a Ciara, diva-like performance in her role as a pop star, despite having the heart of a soul singer.

Furthermore, it is great to see Parker in a lighter role.  His more serious roles like “Red Tails” and “The Great Debaters” are more in line with his true personality, but “Beyond the Lights” shows a different side of his personality.

Unfortunately, filmmaker Gina Prince-Bythewood leaves moviegoers guessing as to what happens to Kaz’s career, instead focusing more on the musical career of Noni.

While the “King of Pop” seemed to never find that proper balance between show business and real life, Noni is determined to use Hollywood and the paparazzi and not let them use her.