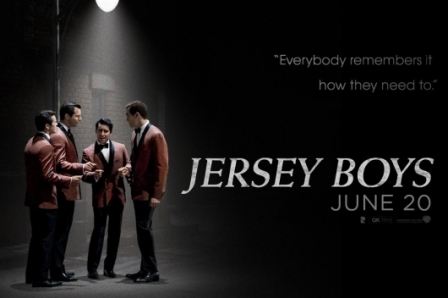 If you think “gangsta” rappers brought the streets to the music industry first, think again.

And if you think “Jersey Boys” is your typical musical biopic with a cliché storyline, think again.

The rise and fall and rise of The Four Seasons is just as much a story that you will find in a movie like “The Temptations” as it is in a film like “Goodfellas.”

In Belleville, N.J. in 1951, only a few ways guaranteed that a person could make it out of the neighborhood; die, go to jail, or become famous.

For Frankie Valli (John Lloyd Young), making it out of his Italian-American neighborhood was not the problem because that was guaranteed.  How he would make it out of that environment was yet to be determined.

The future singer with the beautiful falsetto had plans of becoming a barber.

His dreams were to always become a singer, but an opportunity seemed impossible to find.

It was also impossible for him and his friends, especially Tommy DeVito (Vincent Piazza), to stay on the right side of the law no matter how much everyone tried to keep Frankie on the straight and narrow.

The entire city, including law enforcement, knew he had to be home with his parents by 11 PM, but that did not stop him from participating in petty crimes like the rest of his friends.

The prisons become a revolving door for his crew because as one was being released from prison it seemed like another was entering the prison walls.

Their life was going nowhere and their musical careers were going nowhere until future actor Joe Pesci introduced them to a talented musician and songwriter, Bob Gaudio (Erich Bergen).

Gaudio’s songwriting talents coupled with Valli’s unique falsetto made The Four Seasons one of the biggest bands in music history.

And if you think you’ve never heard music from The Four Seasons or Valli’s solo career, think again.

Musicians from Lauryn Hill (“Can’t Take My Eyes Off of You”) to The Spinners (“Working My Way Back to You”) have covered songs by Valli and The Four Seasons.

Nevertheless, success cannot always erase one’s demons and sometimes those demons can ruin everything that is worked for even at the peak of one’s success.

“Jersey Boys” is simply an amazing film because it does not sugarcoat the internal problems within the group, and the film is not merely a two-hour concert film of the group.

The hardcore street culture exhibited by David Ruffin in “The Temptations” is multiplied three-fold in “Jersey Boys” because The Four Seasons did not just consist of one thug like The Temptations; they had three.

As in the play “Jersey Boys” and old Spike Lee movies like “She’s Gotta Have It,” the film directed by the great Clint Eastwood utilizes multiple narrators talking directly into the camera, giving their own perspective of what went on in the group.

This style ensures that the film is not just one member’s perspective like Otis Williams in the miniseries “The Temptations,” but a well-rounded version of what really went down.

The actors were beyond brilliant with Piazza stealing the show with his portrayal of the “two bit hustler” Tommy.

More importantly, we get to see how the code of the streets influenced Frankie and Tommy’s friendship for better or worse.

Eastwood only erred in his filming of the interstate drives between concert dates.  The utilization of green screen technology did not give a realistic visual during those shots.

Regardless, “Jersey Boys” shows the difficulty of maintaining a successful singing group that exists even today.

Groups like The Four Seasons had to overcome an uncertain future on the streets only to deal with the gangsters of the music industry proving that the “barrios” are often very similar to the boardrooms of America.