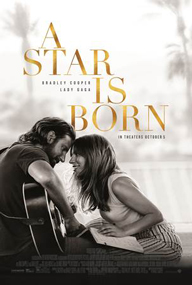 A Movie Star is Born

Singer Lady Gaga kills it in “A Star is Born.”

Her splendid vocals come as no surprise to anyone with ears.

But in “A Star is Born,” her stripped down and vulnerable performance as a young aspiring singer trying to showcase her talents to the world shows how love, jealousy, alcohol and buried pain can shatter dreams that have finally come to fruition, leaving one’s life and future in broken pieces.

Have you ever met someone and thought to yourself, what is this person doing here?

The person obviously does not belong where they are because they have so much potential for more in life.

Often, talented people fear failure if they pursue their dreams.

Sometimes, people with potential just fear the unknown and find comfort in their current life and surroundings.

Other times, people feel guilty because of the talent God has given them and survivor’s remorse starts to kick in when they think about all of the people they have to leave behind if they fully chase their dreams.

In “A Star is Born,” Ally (Lady Gaga) represents that person sitting idly on wasted potential.

Although she has one of the best voices in the known world, to quote Randy Jackson of “American Idol” fame, Ally seems content working a nine-to-five as a cook, while helping her father with his transportation company.

Even Ally’s father does not know why she has not shared her gift with the rest of the world.

One person that refuses to let her sit on her gift is her co-worker at the restaurant, Ramon (Anthony Ramos, Netflix’s “She’s Gotta Have It”).

Although he works a nine-to-five just like Ally, he also books her as a singer at a club for drag queens.

Ally is the only female allowed to sing at the drag bar because the male talent knows her gifts cannot be denied and they want their fan base to see what they see in Ally.

On the contrary, Jackson Maine (Bradley Cooper) represents the other end of the talent spectrum.

He has just as many musical gifts as Ally.

However, Jack has totally realized his potential, becoming a worldwide pop sensation, selling out concert venues across the country.

Unfortunately, Jack’s problem is that he might be sabotaging his extremely successful career by drinking and popping pills in excess.

His drinking is so bad that he cannot function without liquor, stumbling inside the drag bar one night after one of his concerts.

When Ramon recognizes the pop star, he lets him know that this particular bar might not be Jack’s cup of tea. Jack’s response is basically if there are cups of alcohol then he is in the right spot.

Actually, he definitely winds up in the right spot that night because Ally’s talents blow Jack away, both physically and artistically.

Although Jack is smitten by Alley, he is also fascinated with her talent as a vocalist and songwriter.

And even though people like Ramon and her father Lorenzo (Andrew Dice Clay) know that Jack can change Ally’s life if she goes on tour with him, Ally knows that Jack’s battle with alcoholism might become something too big to handle, even if her involvement with Jack makes all of her dreams come true.

When Ally finally does decide to hit the stage with Jack, her “fifteen minutes” on stage leads to much more than just fifteen minutes of fame.

She becomes an instant viral sensation and a pop star in the making, signing to Interscope Records.

However, when Interscope Records begins changing her style from the more country and rock vibe she had with Jackson to a more profitable pop sound and when Jackson’s behavior towards her begins to change, can Ally survive the stresses of Hollywood?

Lady Gaga will definitely receive an Academy Award nomination for her breathtaking performance in “A Star is Born.”

However, Cooper’s performance on screen is nothing to dismiss either.

His acting performance in “A Star is Born” is one of the best performances of his career.

Finally, someone from the East Coast (Philadelphia in Cooper’s case) gets the country drawl down without trying too hard to be country.

People down south, especially from Houston, still scoff at actors like Allen Payne who butchered the country drawl in movies like “Jason’s Lyric” back in 1994.

Thankfully, Cooper does not try too hard to get that country twang down like so many actors do.

Furthermore, Jackson’s personality is so laid back and lackadaisical that he is enduring despite his battle with alcoholism and insecurity.

Additionally, all of the actors like Ramos, Clay and Sam Elliot, who plays Jackson’s much older brother Bobby, shine thanks to Cooper’s skills as director.

Expect cameo appearances from some of the best comedians in the game like Dave Chappelle, Eddie Griffin and Luenell also.

Chappelle shows so much talent as a dramatic actor in “A Star is Born,” that Lady Gaga might not be the only dramatic acting star that is born thanks to this film.

However, “A Star is Born” belongs mainly to Lady Gaga.

Never has a singer captivated the movie screen with her vocals since Whitney Houston in “The Bodyguard” and “The Preacher’s Wife.”

But while Houston’s role never showed her in a light that was not glamorous, “A Star is Born” shows Lady Gaga in such a raw way that even non-fans will become Lady Gaga fans after two hours and fifteen minutes.

Like The Notorious B.I.G. once said, the more money you get, the more problems you get. And jealousy and envy is just something that comes with the territory.

But the world cannot produce enough jealousy or envy to stop the astronomical talents of Lady Gaga from shocking the world.

Lady Gaga is the complete star.

And her star will not dim anytime soon.

A true movie star is born.