Film Review: History Made in New Version of ‘Annie’ 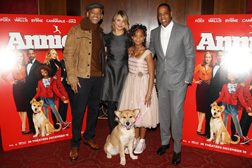 In the past, the character Annie was always played by a Caucasian actress.

However, this remake of “Annie” is drawing much controversy because Jay Z and Will Smith produced the film and both leading roles feature African-Americans.

The role of Annie is played by newcomer Quvenzhané Wallis who is an African-American actress known for her leading role as Hushpuppy in the critically acclaimed drama “Beasts of the Southern Wild.”

Triple-threat comedian, actor and singer Jamie Foxx plays Will Stacks, a modern-day version of the original character Daddy Warbucks, a very serious and ambitious cell phone mogul who has decided to run for mayor of the city he loves, yet is ashamed of where he came from.

Although the two major roles in the movie were cast with two Black actors, audiences of all colors will still fall in love with “Annie.”

Based in New York, Wallis commands the screen as the foster kid who lives a “hard-knock-life” but always finds a silver lining as she knows the “sun will come out tomorrow” while continuing the search for her parents to no avail.

Not to be outdone by 11-year-old Wallis, Foxx holds his own and does not disappoint as he lends his smooth melodic voice to the film while pulling the audience into his world as he changes from being obsessed with both taking over the cell phone industry and becoming mayor, to falling in love with Annie as she becomes a part of his family.

There are two additional twists in this version of “Annie;” one which sheds light on an issue that’s more prevalent in today’s society but not admittedly shared by individuals who have this problem…illiteracy.

The film is fluid as it moves the audience through song and dance numbers that will uplift anyone’s spirits. Moviegoers will almost miss that this Annie character cannot read.

The second twist is Foxx’s character Stacks is in love with his faithful personal assistant Grace Ferrell and Annie's mother figure played by Rose Byrne, an Australian actress known for her roles in “Bridesmaids” and “Neighbors.”

Holding true to the original version where Daddy Warbucks falls in love with his personal assistant Grace where the characters are both White, this union clearly depicts an interracial couple, another note of controversy in the film.

Despite the raised eyebrows “Annie” has received, audiences are in for a treat as everyone in the cast sings including Cameron Diaz who reportedly took singing lessons to reprise the role of the cruel, alcoholic foster mother to Annie, Miss Hannigan.

This version of “Annie” makes history because African-Americans portray the leading characters and produce the film.

However, this is nothing new for the 11-year-old actress Wallis as she has made history before being the youngest actress ever to receive a nomination for the Academy Award for Best Actress.

The modern-day twist on this version of “Annie” will have audiences feeling light as a feather as they leave the theater. It is a great film for families to see during this holiday season!