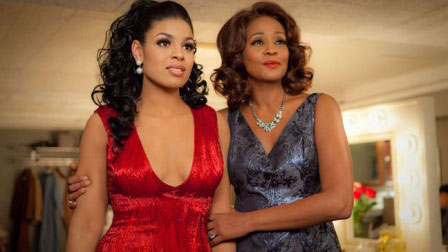 Remaking a classic is always a dangerous undertaking.  People will always compare it to the original and often will disapprove any changes made the second time around.

The good thing about remaking a classic is that it exposes great work to a generation too young to remember the original.

It has been said that Whitney Houston always wanted to remake the Sparkle film, and she succeeded before her untimely death.  Furthermore she succeeded in bringing this classic to a younger generation and in showing fans what might have been in store for her in future movie roles.

Emma, played by Houston, is the single mother of three beautiful, talented and intelligent daughters.

She became pregnant with her first child nicknamed “Sister” (Carmen Ejogo) at 16 years old and her daughters do not know who their fathers are.

Extremely talented, Emma tried her hand at a singing career but fell victim to the same evil temptations that many entertainers succumb to and she is determined to not let her children follow in her footsteps.

She insists that they go to church and Bible study and forbids them from even thinking about a career in the music business.  This is extremely difficult for Sparkle (Jordin Sparks) who discovers a song in every aspect of her daily life.

Sparkle is a gifted songwriter, pianist and singer but does not have the confidence to tackle the stage on her own.  She actually, eventually, looks like a young Alicia Keys singing effortlessly while stroking the piano keys.

However, what she lacks in confidence her older sister Tammy better known as Sister makes up for.

Sister has a great voice, but even greater sex appeal and she uses it to sell the songs that Sparkle writes for her.

Throughout the Sparkle film, the two sisters are forced to sneak out of their mother’s house to perform in talent contests, where Sparkle grabs the attention of an aspiring music impresario by the name of Stix (Derek Luke).

Stix is smitten by Sparkle’s beauty and believes in her talent, but believes more so in the talent of Sister.  However, he believes that it would be easier for them to make it in the industry as a trio like the Supremes.  They coax middle sister Dolores (Tika Sumpter) into the group called Sister and Her Sisters, but she makes it clear that she is only in the group until she gets accepted into medical school.

Emma’s three children represent the complexity of human beings and the different personality traits that their off springs can inherit from them.  Each daughter represents a facet of Emma’s personality at one time or another.

She aspired to be a musician like Sparkle.  And like Sparkle, Emma still desires to live her life in a righteous way, but finds it hard to balance that with her secular dreams.

Emma was once the bad girl, getting pregnant as a teenager and dealing with the demons of alcohol and other narcotics.  Sister embodies Emma’s bad girl side and is tempted into the wrong relationships with men such as comedian Satin (Mike Epps).

Dolores represents what could have been for Emma.  She is able to use her brains and not her beauty to get ahead in life.

When Emma discovers that her daughters disobeyed her orders in the Sparkle film, it leaves to family chaos and that chaos only escalates throughout the film.

The Sparkle film shows how dreams can destroy some people, but through strength and perseverance one can still realize those dreams.

It also shows how strong the family bond is and should be, and what a family can overcome if they stick together.

Audiences will not be disappointed in Houston’s film swan song.  Her motherly persona is one that people can realistically envision as she probably attempted to persuade her own daughter Bobbi Kristina to avoid the same pitfalls that doomed her.

Although Sparks, Ejogo and Sumpter steal the show, Houston gives life to her character and one almost forgets that she is not with us anymore.

Writers Mara Brock Akil and Howard Roseman change the story enough to make it their own, but not so much as to stray too far from the original.  The only scene that seemed a bit awkward was the fight scene between Satin and Sister