Do Fans Have Nothing But Love for ‘The Five Heartbeats’ Sequel? 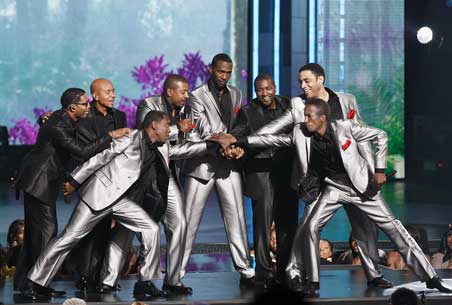 The last time we saw “The Five Heartbeats” together was when they reunited with After 7 for the 2011 BET Awards (Photo Credit: AP Photo/Matt Sayles).

Get out your old sequin suits, and your dancing shoes, because Duck, J.T., Choir Boy, Eddie Kane, and Dresser are coming back!

“The Five Heartbeats” sequel will be starting production this year, confirmed by Robert Townsend on the “Tom Joyner Morning Show.”

Directed by Robert Townsend, who also co wrote with Keenan Ivory Wayans, “The Five Heartbeats” is a musical drama loosely based on several artists from the 1950s and 1960s era.

“The Five Heartbeats” is a favorite in the Black community as we watch the re-runs monthly, recite our favorite lines and songs, and talk about our favorite characters.

So, since we still watch this movie often for the last 20 years, do we need a sequel?

Should Townsend really start production on “The Five Heartbeats” sequel or should he stop in the name of love?

When a film does great, producers and writers have a tendency to do a sequel, and that tends to go two ways: great like the “The Godfather: Part II” or horrible like “Weekend at Bernie’s II.”

Where could “The Five Heartbeats” sequel fall?

What could happen to these characters after over 20 years?

Should everybody come back or should “The Five Heartbeats” sequel have mostly a new cast?

What are your thoughts on “The Five Heartbeats” sequel?

“WHOA, WOW,” said actress Sheirah Kay, 37. “They are making a ‘Five Heartbeats’ sequel? I really love movies from that era where groups really sung with clean dance steps and sharp uniform suits. I want to be in it! I think Robert Townsend should put more undiscovered talent in the sequel. I just wonder how he plans on doing (the) story based off where the original left off?”

Where could “The Five Heartbeats” sequel continue as far as the storyline?

The original story ended with their friendships mended, success achieved, and they were old at a family picnic, barely moving from old age.

What are some ideas for “The Five Heartbeats” sequel?

“Instead of a sequel, they could do a prequel,” suggested Nichols, 24. “I would like to see their childhood, how they met, and started the group. It would also be interesting to see the hardship they endured when they first started out. They could show more of the relationship with Eddie Kane and his father to show why his father was so mean.  I would also like to see new actors in ‘The Five Heartbeats’ sequel like Michael B. Jordan. A prequel is really the only way I see it going.”

However, Tiara, 33, said, “I can’t see a ‘Five Heartbeats’ sequel, and wouldn’t want to. I would watch it from the Redbox, just to see how they messed it up. I think Robert Townsend may want to stay relevant. I think he’s talented and I love his work, but maybe he can’t come up with any fresh ideas and he decided to take something everybody loves and make a sequel. I hate when Hollywood does that. I bet the storyline will be about one of the original member’s son and starting a group, and that’s boring to watch when we will be thinking about the original movie. Sometimes things are best left alone.”

Is “The Five Heartbeats” movie finished?

What more could we get from the story of one of our favorite fictional musical groups?

“NO SEQUEL,” said Michael, 40, a writer and director. “The reasons to do a ‘Five Heartbeats’ sequel are not there.  The sequel will not compare to the original no matter what the plot or storyline is about. The way the original ended there is no room for a sequel. What will be the story focus on? Who will be the new villain? Sometimes it’s best to stop with one. That’s just my opinion.”

“The Five Heartbeats” is a classic film.

We love the songs, those endearing and funny scenes, and we don’t want it to be ruined with a horrible remake.

If there’s going to be a Five Heartbeats sequel, it should be as soulful, touching, tear-jerking, and funny as the first movie, otherwise the sequel will remind us of when Eddie Kane came to the show in his old costume on drugs, wanting to sing! Just let it go.