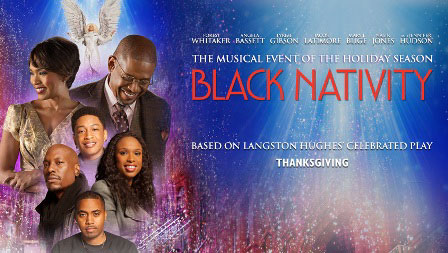 And a Child Shall Lead Them

Well, I guess Hell will freeze over this Christmas.

Guarantees usually do not exist in Hollywood, but one guarantee has been constant for over 20 years and that is convincing performances by Academy Award winner Forest Whitaker.

However, for the first time in his role as Reverend Cornell Cobbs in “Black Nativity,” Whitaker is not convincing, allowing young Jacob Latimore to steal the limelight from him and veteran actress Angela Bassett.

Langston (Latimore) and his mother (Jennifer Houston) are all that each other has.  Struggling to survive in inner-city Baltimore, Langston’s mother sends him to Harlem for the Christmas holidays to stay with her estranged parents after they are evicted from their home for being delinquent $5,000.

They are respected pillars in the community of Harlem, with Rev. Cobbs serving as pastor of an influential church.  Rev. Cobbs’ own father even marched with Dr. Martin Luther King, Jr., who gave Cornell a pocket watch during the Civil Rights Movement.  The watch is the pastor’s prized possession and he wants to one day pass it down to his grandson.

Initially unwillingly to live by the rules of his strict and highly religious grandparents, Langston attempts to devise a way to earn the $5,000 his mother needs in order to be reunited with her in Baltimore.

“Black Nativity” is an enjoyable Christmas musical.  While Hudson is her usual stellar self vocally, this is no “Dreamgirls.”

However, “Black Nativity” is unique because it is a musical that combines gospel, R&B and hip-hop, a combination rarely seen in musicals, with the exception of maybe “Idlewild.”

Latimore is very convincing as Langston, who is named after the poet Langston Hughes, a streetwise teenager who only needs true guidance and a strong paternal figure in his life.

The role of Langston epitomizes the strain that teenage pregnancy puts on many families from disappointed grandparents, to absentee fathers to financial struggles.

Langston is a microcosm of many young Black teenagers who are raised by single mothers.  Their anger, which comes from not being wanted or abandoned, can either lead to destruction or motivation.

Ultimately, Latimore’s role as Langston should place him on a very short list of young and talented teenage Black actors, with Skylan Brooks of “The Inevitable Defeat of Mister and Pete.”  Langston is able to prove that age does not equate to wisdom as he is the one that holds his family together through the difficult times.

Furthermore, “Black Nativity” is anything but predictable, but that unpredictability is not enough to make it a good film.  The film is definitely an enjoyable holiday film, but nothing in comparison with competition from “The Best Man Holiday” and “A Madea Christmas.”

The plot of “Black Nativity” seems lightweight for filmmaker Kasi Lemmons who did a masterful job developing characters and storylines in films such as “Eve’s Bayou” and “Talk to Me.”

Church scenes are not riveting or Holy Spirit-filled, and the dream sequences seem to make the film a bit unrealistic.

Nevertheless, Whitaker has given moviegoers so many classic films and performances in the past that his performance deserves a reprieve from the depths of Hell because his place in Hollywood Heaven has long been sealed by the blood.