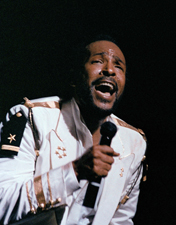 Is Marvin Gaye’s Life Story Finally Coming to the Screen?

Biopics, especially centered on African-American musical artists, have become very profitable.  But one of the most interesting and important forces in music history, Marvin Gaye, has yet to see his story told despite numerous efforts.

That fact might be changing soon thanks to Academy Award winner Jamie Foxx (“Ray”).  He is producing a Marvin Gaye biopic, alongside Suzanne de Passe and Madison Jones, which will be shopped to linear and digital outlets, according to Billboard.

“I’ve been a huge fan my whole life,” said Foxx.  “His brilliance in music is unparalleled.  Marvin Gaye’s story has always fascinated me.”

The Marvin Gaye biopic reportedly has the blessing of the Gaye family as well as Motown Records founder Berry Gordy, who released all but one of his studio albums (“Midnight Love” on Columbia Records in 1982) before his death in 1984 at the hands of his father Marvin Gay, Sr.

“Marvin was the truest artist I have ever known,” Gordy said to Billboard.  “I am confident that this is the right team to bring his story to the audience in an authentic and compelling way.”

According to BlackAmericaWeb.com, “There have been numerous attempts to mount a (Marvin) Gaye biopic.  Directors F. Gary Gray, Cameron Crowe, James Gandolfini, Scott Rudin and actors Jesse L. Martin and Lenny Kravitz have all been attached to projects, but none had been authorized by the Gaye family.”

Gordy’s Motown Records assistant de Passe has an extensive resume in the field of television and movie production.

The former creative supervisor for the Jackson 5 has produced “The Jacksons: An American Dream,” “The Temptations” miniseries, “Motown 25: Yesterday, Today, Forever” as well as executive producing sitcoms “Sister, Sister” and “Smart Guy.”

“We’ve been involved in a number of attempts to get this done,” said de Passe.  “And now that we’ve been able to marshal the forces and Jamie’s on board as a partner, we’re excited to get going.”

Gaye scored his first hit record for Motown in 1962 with “Hitch Hike,” but spent most of his early years at the label as a session musician for artists like Stevie Wonder and The Supremes.

Throughout the 1960s he scored countless other solo hits like “I Heard it Through the Grapevine” and duets like “Precious Love” with Tammi Terrell.

In the 1970s, Gaye gained more creative control from Gordy and his music got more political with the 1971 album “What’s Going On.”

However, in 1973 he returned to his romantic roots with songs like “Lets Get it On.”

Gay, Sr. infamously murdered his son after a heated argument on April 1, 1984.