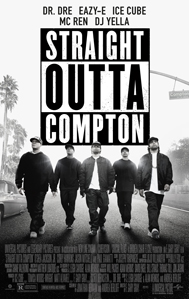 The Bar Is Set

All urban musicians contemplating a biopic (New Edition and the estate of Tupac Shakur) beware because “Straight Outta Compton” has set a new bar for musical biopics.

All past urban music biopics (“The Temptations,” “The Jacksons: An American Dream” and “Notorious”) please step down from the top row of “Mount Biopic Rushmore” because Eazy-E, Dr. Dre, Ice Cube, MC Ren and DJ Yella have replaced you.

Many hip-hop heads know the story of the groundbreaking reality rap (not gangsta rap) group N.W.A and how their brutal honesty and outspokenness on police brutality, inner city crime and the opposite sex changed pop culture forever in the late 1980s.

Fewer, however, may know the real people behind the public image, their friendships, their personalities and their desire to make a name for themselves in an industry that remained unreceptive to rap music.

Eazy-E (Jason Mitchell) is trying to survive the dope game.

Dr. Dre (Corey Hawkins) is trying to carve out his own niche in the music business aside from the image crafted by his mentor Alonzo (Corey Reynolds) of the World Class Wreckin’ Cru.

DJ Yella (Neil Brown, Jr.) is trying to remain employed by Alonzo, despite trying to seduce his girlfriend.

Ice Cube (O’Shea Jackson, Jr.) is working on his rhyming skills while attending high school and trying to avoid the pitfalls of the neighborhood like gangbanging and police brutality.

Fed up with Alonzo’s desire for only R&B, homeless and trying to provide for his daughter, Dre reaches out to neighborhood hustler Eric Wright (also known as Eazy-E) to fund his vision of reality rap.

Eric knows that there is no future in the dope game and is intrigued by Dre’s proposition to start a hip-hop record label dedicated to hardcore rhymes.

Ice Cube is a talented lyricist, but when the East Coast rap group HBO refuses to record his song “Boyz-N-The-Hood,” the future members of N.W.A encourage Eric to record the song.

Eric is no rapper, but his life embodies the image of the future group N.W.A.

He records the song, blows up as a solo artist and subsequently the group blows up as well.

All of the actors are superb and should receive award consideration.

Jackson is the mirror image of his father Ice Cube.  He even has his mannerisms, such as rubbing his head with both hands down pat.

However, the star of the show is Mitchell.  He simply embodies Eazy-E, complete with the voice, demeanor, look and sense of humor.

“Straight Outta Compton” is not merely a concert film like “Purple Rain” but an in-depth look at each individual, giving us an accurate portrayal of how they really were as people, not how the media tried to define them early in their career.

Nevertheless, “Straight Outta Compton” should have shown more love to MC Ren, whose writing skills were instrumental to the success of N.W.A.

Furthermore, “Straight Outta Compton” begins in 1986 but Dr. Dre already has L.L. Cool J’s “Bigger and Deffer” album, which did not come out until the following year.

Despite the mistakes in chronology, “Straight Outta Compton” makes very few other mistakes as a biopic.  They have set the bar high and created a new precedent, much like they did when they burst onto the music scene in the late 1980s.