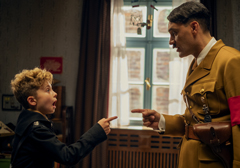 One has to have a lot of talent to make a satire about Nazi Germany and the atrocities of the Holocaust and World War II without coming across as insensitive and downright despicable.

Nevertheless, through the innocence of an impressionable child, “Jojo Rabbit” blasts the mentality of the Aryan nation and the treatment of the Jews in a way that comes across more digestible than if done via ignorant adults.

While “Jojo Rabbit” is not the bomb, it has its own brilliance.

Even though Germany is in the midst of World War II and is currently killing millions of Jewish people simply for their religion and race, Jojo should still not find himself concerned with grownup affairs.

Instead of staying in a child’s place, which should be reading books and playing outside with friends, Jojo is eagerly anticipating joining a Nazi school for kids, where adult Nazis teach young Nazis in training the art of being racist and ignorant.

Instead of playing marbles on street corners in the neighborhood, children like Jojo are preparing to fight wars against the “evil” Jews.

Jojo is reminiscent of the character Maria (Cara Horgan) in “The Boy in the Striped Pajamas,” becoming victimized by the brainwashing of the Nazi regime.

But the way Jojo spouts off his Nazi nonsense is adorable in a militant midget kind of way.

On the hit 1970s sitcom “Good Times,” Michael Evans (Ralph Carter) or the “militant midget” as his father referred to him, got away with his militancy because he was so pure and innocent as a result of his young age.

If a full grown man like Michael’s father James Evans (John Amos) had said half of the things Michael got away with on “Good Times,” the good times would not have lasted as long.

The network would have turned those good times into bad times very quickly for the cast and the crew of the classic sitcom.

Furthermore, Jojo eases the harshness of the Nazi regime in the same way that rapper Flavor Flav eased the militancy of iconic hip-hop group, Public Enemy.

Rapper Chuck D of Public Enemy used to go off on anti-White rants all of the time, but his comedic foil Flavor Flav made those rants easier to take because he would have fans laughing at his antics and words.

“Jojo Rabbit” does the same for the atrocities that the Jewish community endured during World War II.

Jojo spits so much hatred in “Jojo Rabbit,” but not loving him is almost impossible.

One of the main reasons that Jojo wants to fight the Jews so badly is because he wants to follow in his father’s footsteps.

His dad is currently on the frontline fighting for the cause.

In Jojo’s mind, he has no choice but to carry on the cause for the Aryan race in “Jojo Rabbit.”

His mother Rosie (Scarlett Johansson) plays the part of a good Nazi woman to her brainwashed son, Jojo.

Nevertheless, she might be hiding a secret that puts her safety in danger, as well as the physical, mental and emotional welfare of her son.

But what really throws Jojo for a loop in “Jojo Rabbit” is when he meets a real life Jewish person.

Just like many people brought up to hate people because of their race, religion or other physical trait, Jojo begins to rethink his hatred after he finds he could actually like a person that is supposedly inferior to him and his people.

To write a non-offensive satire on a topic that easily offends shows the talent of writers Waititi (screenplay) and Christine Leunens (novel).

Furthermore, Waititi’s immature portrayal of Hitler is genius because he portrays Hitler as the clown history remembers him as.

Waititi does not force moviegoers to take Hitler serious with the stone-cold face that history books show of him.

Hitler becomes almost an imbecile thanks to “Jojo Rabbit.”

Hopefully, Hitler will turn over in his grave knowing that “Jojo Rabbit” makes a mockery of his ignorant regime.

Though “Jojo Rabbit” is not the best film of the fall season, seeing “Jojo Rabbit” nominated for an Academy Award for best-adapted screenplay would not shock many.

But “Jojo Rabbit” brilliantly captures what satires want to capture.

“Jojo Rabbit” has to rank as one of the best satires in recent memory.

Although many fail, satires like “Jojo Rabbit” want to make people think and laugh by poking fun at the stupidity of stupid people.

The Nazis are and were, stupid folks.

But “Jojo Rabbit” educates moviegoers because it shows how innocent and impressionable children can fall victim to the idiocy of adults.

Because of the ridiculous things that adults put into the heads of children, hatred continues from generation to generation.

And while the atrocities inflicted on Jews might qualify as the world’s biggest atrocity, hatred and ignorance does not just belong to the Nazis.

All races and religions have used their position and power to promote bigotry at some point in time.

Therefore, “Jojo Rabbit” should represent a cautionary tale about what people teach the next generation.

The next generation can come together because of the teaching of their elders or they can tear each other apart because of what the older generation teaches them.

Unfortunately, “Jojo Rabbit” does have its cheesy moments.

But the cleverness outweighs the cheesiness because it takes talent to poke fun at such an important tragedy without making a mockery of those who suffered at the hands of a hateful tyrant.