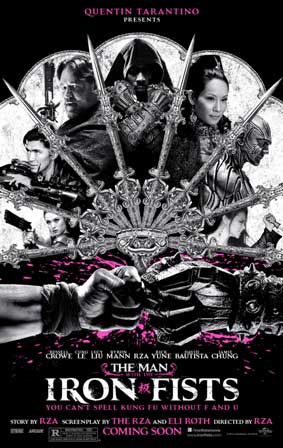 Growing up poor in inner-city Staten Island, N.Y., nothing about Robert “Bobby” Diggs’ life seemed glamorous or Hollywoodesque during the 1970s.

The talented youth, who would take the world by storm in 1993 as the mastermind behind arguably hip-hop’s greatest group the Wu-Tang Clan, saw nothing but struggle and strife throughout his early years.

He learned at an early age how difficult life could be, but found an escape from reality in the martial arts classics of his youth, which starred such legends as Bruce Lee and Jim Kelly.

“Martial arts films have been influencing me since I was nine when I first saw kung fu movies and karate flicks on Staten Island at the St. George Theater,” said RZA.  “Double features, I’ll never forget.  This one was called Fury of the Dragon starring Bruce Lee in it as Kato, and the other was Black Samurai, starring Jim Kelly.”

Intrigued by the arts and storytelling as a youth, hip-hop music with its realistic tales of urban life on the surface seemed less of an escape from reality, but a portrayal of reality.

However, the lessons he learned on storytelling through his music and the lessons learned from filmmaking legends like Quentin Tarantino allowed him to create his ultimate-escape from reality and possibly a renaissance for martial arts flicks with his directorial and lead acting debut, The Man with the Iron Fists.

While Tarantino was filming Kill Bill, RZA was basically his shadow, learning the art of filmmaking from a certified movie genius.  Their relationship came full circle when Tarantino began assisting RZA on The Man with the Iron Fists in China.  Now the legendary director says his “student has become a master.”

However, making the transition from music to movies was more difficult for RZA than some musicians lead fans to believe.

“I think it is more difficult to expand upon one’s thoughts,” RZA told Regal Magazine.  “Actually in a song, because a song’s an abstract, you can say in four lines and a listener could figure it out…For writing a screenplay, it’s not really all about the words sometimes, because it’s visual and that’s where the difficult part comes at.”

The film The Man with the Iron Fists stars the hip-hop legend, and movie co-writer, as Blacksmith in an epic tale of warriors and killers who battle for gold in a Chinese village.

Always seeing martial arts films as an escape from reality, The Man with the Iron Fists centers on 19th century China in an era in which the British Empire flooded the country with opium in an effort to control the nation and control the trade market.

Though set in the 1800s, RZA effectively weaves classic hip-hop from Kanye West and fellow Wu-Tang Clan members, as well as soul sounds throughout the film in a way that does not seem awkward or unrealistic.

“I didn’t worry about the time period [when it came to the music],” RZA told Regal Magazine.  “Being a Tarantino student and from the ‘school,’ I knew that I could break certain rules.  So, you’re looking at Inglourious Basterds, which is in the 40s and David Bowie came on.  So I just knew that I could break that rule and I broke it.  But…it still captures you and captures your imagination in the film.”

Nevertheless, fans want to know if working with some of his Wu-Tang brothers on this soundtrack captured his imagination in regards to a group reunion.

RZA said working with fellow members did not spark an immediate interest in another Wu-Tang project but he said the group must do something for the fans for their 20th anniversary in November 2013.

Whether that is a CD, a concert or just an appearance on “Good Morning America,” RZA believes they owe it to their fans to celebrate the 20th anniversary of the groundbreaking CD “Enter the Wu-Tang: 36 Chambers,” which captured the imagination of hip-hop heads everywhere.

Furthermore, if one looks at RZA’s legendary career in music and now film, one can see how his imagination helped him escape the grim realities of his past and create his own “alternate universe.”

And his hard work and perseverance to get The Man with the Iron Fists completed is a living testament that with the same work anyone, regardless of their current situation in life, can permanently escape the grim reality of their present and make a brighter future.

The Man with the Iron Fists is in theaters everywhere today.