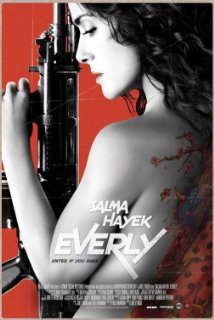 Baton Rouge, La. born emcee Webbie let the world know what it takes to classify as a “bad” chick with his hit song “Bad Chick” in 2005.

Although that song was released a decade ago, Webbie must have been foreshadowing “Everly” starring Salma Hayek, which is in theaters today.

When many had given up on Everly (Hayek), she proved how much fight she had in her, which epitomizes the bad chick that she is.

Everly has not seen her mother and her daughter Maisey (Aisha Ayamah) in years.

One minute she was present in her family’s life and the next she disappeared.

Her mother fears that she is in the gutter somewhere, strung out on drugs.

That would be a justifiable explanation for abandoning your only child while not even blessing them with a phone call or Christmas and birthday gifts over the years.

However, her mother’s anger turns to empathy when she realizes the hell that Everly has been living through over the past few years.

Mobster Taiko (Hiroyuki Watanabe) kidnaps Everly with plans of turning her into a prostitute.

Her beauty will command top dollar from johns, but when Everly refuses to play ball, she costs Taiko an excessive amount of money.

Upset that he did not get his planned return on his investments, Taiko puts a $60 thousand contract on her head, believing that a lowly prostitute will not put up much of a fight to save her own life.

The one person that is looking out for her unintentionally abandons her when she is in most need of his protection.

However, Taiko does not realize just how bad a chick she is and that she will go to drastic measures to save her life and the lives of her mother and daughter.

In order to do that, she has to escape the death trap of an apartment that she is currently in despite the assassins lurking around every corner seeking the $60 thousand on her head.

“Everly” is not a great movie, but it is adequate enough because of the decent acting job of Hayek and the intense and violent fighting scenes that she excels in.

Hayek almost single-handedly makes up for the subpar performances of her co-stars, particularly Everly’s fellow prostitutes who must only have a specific talent unlike their adversary.

Furthermore, Ayamah is adorable in her performance as the innocent and lovable Maisey.

Unfortunately, “Everly” suffers from bad acting from every other actor in the film, which stops it from reaching its full potential.

Nevertheless, it focuses on the timely subject of human trafficking and sex slavery, while showing the great lengths any mother will go to in order to save the life of their precious baby.

When it comes to saving the life of a child, a woman that has been beaten down and left for dead will somehow find the courage and strength to take on an army of assassins in order to protect her child.  Now, any woman who will do that is definitely a bad chick.