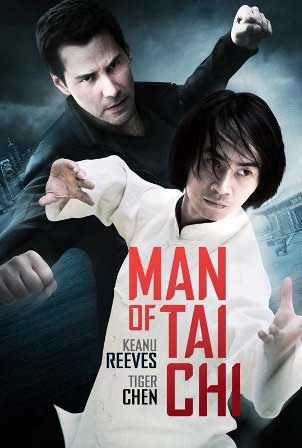 “You’re not a warrior, you’re a rat,” Donaka Mark (Keanu Reeves) told Chi-Tak (Sung-un Yoo) when he refused to finish off a beaten fighter.

Like many other martial artists in Donaka’s underground fight club, Chi-Tak had signed up to fight other warriors and earn some good money, not kill other fighters.  When he does not have the stomach to participate in the fight club, he goes to the local authorities to blow the lid off the entire operation.

Tiger, who spars with his master both literally and figuratively, wants tai chi to be seen as a true martial arts discipline.  Until that time, many detractors of tai chi saw the art as mere exercise, lacking the force needed to win a martial arts tournament.

However, Tiger is able to combine the balance learned through tai chi meditation with his natural instincts as a warrior to become a more than adequate fighter.

Despite his success in the ring, Tiger struggles outside of the ring.

When developers want to tear down a 600-year-old temple and uproot his beloved master, Tiger has to find a way to earn enough money to save the historic building, despite earning only meager wages as a delivery man.

Donaka offers him the opportunity to earn more money than he has ever seen in his life.

However, there is only one predicament.  Using tai chi to earn money is dishonorable, but letting the government close down the temple might be even more dishonorable.

But the real dilemma facing Tiger is can he save the temple and still save everything the temple has taught him?

The fight scenes in “Man of Tai Chi” are brilliant.  Each fighter is skilled and talented at their discipline, and they also still manage to give a strong theatrical performance.

“Man of Tai Chi” does a good job of showing how one can quickly lose their sense of self once money and power is thrown into the mix.  Tiger goes from an innocent student of the tai chi discipline, to a cold-blooded warrior.

Despite the subtitles, it is obvious that Reeves was able to get good performances from the majority of the cast in “Man of Tai Chi,” his directorial debut.

However, Reeves’ acting performance does not measure up next to his “Man of Tai Chi” counterparts, which prevents the film from reaching its full potential.  Directing oneself is an art in itself, and few seem to master it with the exception of people like Ben Affleck and Spike Lee.

Nevertheless, “Man of Tai Chi” is more than a martial arts film.  It is a coming of age film.

Tiger Chen eventually learns that everything is not what it seems.  Everyone is not who they say they are.  And he learns that for a true warrior, discipline is sometimes a more powerful weapon than violence.