‘Machete Kills’ Not To Be Taken Seriously 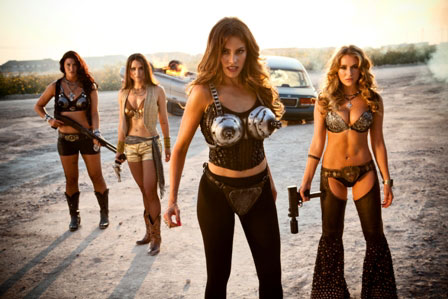 Star power sometimes proves crucial in a successful film.  Sometimes star power is all a film has to brag about.

“Machete Kills” is not a bad film.  It’s just not a film for everyone.

Machete (Danny Trejo) is a hired assassin who is given an assignment by the president (Charlie Sheen) to track down Mendez (Demian Bichir), a crazed lunatic, who has missiles pointed at the United States.

Machete has to fight his way through crooked law enforcement officials, violent prostitutes and numerous criminals in order to fulfill the mission.

While enjoyable and comedic in a corny way, “Machete Kills” is not to be taken seriously, but to be enjoyed for its over the top comedy and gruesome violence and gore.

Logic should be left outside of the theater and the only awards “Machete Kills” should even ponder winning are Razzie Awards, which are given for poor performances.

Honestly, the film is not that bad and the acting is not supposed to be that good, but no legitimate awards will be calling nonetheless?  But, that is the point of “Machete Kills.”

The film is based on a fake trailer that appeared in the Quentin Tarantino film “Grindhouse,” and “Machete Kills” keeps the legacy of Tarantino moving with over the top tomfoolery that somehow seems to work.

The beautiful Sofia Vergara (Desdemona) is enough for any man to want to see “Machete Kills,” and the Latin actress channels her inner Pam Grier by kicking some tail and taking names too.

Sheen, who is billed by his birth name Carlos Estevez, plays the leader of the free world, but does not come across as very presidential.  Mr. President is stereotypical Charlie and seems to be president in name only, sharing his bed with multiple beauties at the same time.

We get cameo appearances from Lady Gaga and Cuba Gooding, Jr., with possible appearances by Justin Bieber and Leonardo DiCaprio coming if there is another installment in the “Machete” franchise.  Somehow, I don’t believe that DiCaprio will be available for the role, but I think Bieber will do just about anything these days.

In addition, “Machete Kills” also is another step in the slow renaissance of Mel Gibson’s career.  However, the film does not help him if he desires to be taken seriously as an actor again.

Nevertheless, the film is not to be taken seriously.  It’s a film that offers some laughs, star power and a good time for 107 minutes.  But if you are a true film aficionado, “Machete Kills” might kill your love for the movie industry.