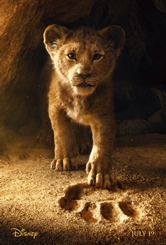 Not on ‘Aladdin’ Level, But Timeless Tale of Accepting Destiny

Who knows what the topic of the first story, book, television show, play or oral presentation was but many of the oldest stories have the same theme, especially stories about nobility.

Whether it is the Bible or a major live action animation story like “The Lion King,” stories of royalty often center on an upset sibling who thinks they deserve to become heir to the throne and therefore do nefarious things to finally assume the crown.

“The Lion King” live action animation movie sticks to the traditional script but even traditional never gets old when everyone, from princes to peasants, can relate to the universal story of accepting one’s calling and one’s destiny with open arms.

A calling or a person’s destiny usually does not just involve or impact that one person.

Likewise, Jackie Robinson breaking the Major League Baseball barrier in 1947 still resonates with athletes of color to this day.

Furthermore, the 2019 United States women’s soccer team’s quest for equal pay, when successful, will reverberate in American sports long after all of us have taken our last breath.

Likewise, in “The Lion King,” Young Simba (JD McCrary, “Little”) taking the throne from his father Mufasa (James Earl Jones) will have a certain impact on the animals of Africa.

And if Simba (Donald Glover, “Solo: A Star Wars Story”) avoids the throne left to him by his father, the impact on the animals of Africa could become catastrophic.

When Young Simba is born in “The Lion King,” animals come from miles around like the wise men did for the birth of Jesus Christ.

And like the birth of Kunta Kinte in the miniseries “Roots,” baby Simba is presented to his African village in full regal splendor by Rafiki (John Kani).

While all of the rest of the animals of Africa beam with pride after the birth of Young Simba, his uncle Scar (Chiwetel Ejiofor) is noticeably absent from the pomp and pageantry.

Not only is Scar upset that his brother Mufasa rules the African kingdom and not him, he is also livid that now he is not even heir to his brother’s throne with the birth of his nephew.

Mufasa knows what time it is with his brother’s jealousy.

However, Young Simba is far too naïve to the ways of the animal kingdom to realize that his uncle does not deserve his trust or his company.

Mufasa warns Young Simba about the perils of royalty and things that he should avoid especially as a young cub.

Even Scar sarcastically warns his nephew about doing certain things.

However, telling a youngster to not do something is basically encouraging them to do what is forbidden.

As a result of Young Simba’s disobedience, he finds himself exiled to another section of the African land, without a father and with Scar taking the throne and using it to further his evil mission with help from some unlikely sources.

While in exile, Simba shows no resemblance of his true self.

It is as if Simba forgets that he is a lion, not to mention the actual lion king.

He befriends animals like Pumbaa (Seth Rogen) who transform his way of life, for better or worse.

Pumbaa teaches Simba the meaning of hakuna matata, a Swahili phrase, which basically translates to living a stress free and worry free life.

However, when Simba happens to run across his childhood best friend Nala (Beyoncé Knowles-Carter), the chance meeting changes his perception on life and purpose.

For the first time in his young life, Simba realizes that his choices affect all of those who depend on him.

Sometimes one act changes history for the worse, and it is up to certain creatures to correct the ills of society via a higher calling on their lives.

Rogen adds some much-needed flavor to “The Lion King.”

Furthermore, “The Lion Kin” benefits from the entertainment institution known as Beyoncé and the future unwavering support of the Bey-hive.

Beyoncé’s fans alone will almost ensure that “The Lion King” tops the box office this weekend.

The native Houstonian’s voice never sounds better as it does in “The Lion King.”

Beyoncé’s talent as a singer is so undeniable that she totally outshines Glover, who is definitely no slouch behind the microphone, vocally.

And with any remake of a Hollywood classic, the comparisons of the live action version of “The Lion King” versus the animated version will become water cooler talk next week at work for many.

Furthermore, “The Lion King” does not reach the level of the recent live action version of “Aladdin.”

But after watching both versions of “The Lion King,” the 2019 live action version stands out a little more because of the dopeness of CGI.

Both versions of “The Lion King” are basically carbon copies dialogue wise and storyline wise, but the new version is obviously less cartoonish because of technological advancements.

What is remarkable about the voice performances in “The Lion King” is that Glover chose to recut his voice over after the loss of his father.

Understanding the pain of losing a father, Glover got to bring more pain to the role of Simba.

But what truly places “The Lion King” on the throne is a story that everyone can relate to from royalty to the riff raff.