Isaiah Washington Makes Comeback in Film Based on D.C. Snipers 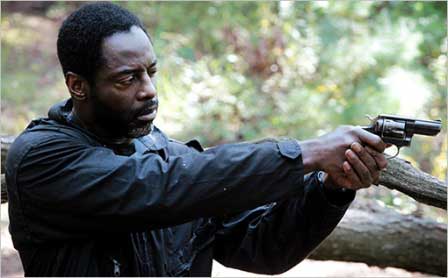 Mass killings have become so commonplace in America that they seldom shock us anymore.

However in 2002, times seemed a bit more idyllic.  Sure, America had survived several school shootings but our sense of security was still somewhat in place and we looked at those murders as an aberration.

Nevertheless, the Beltway sniper murders by John Allen Muhammad and Lee Boyd Malvo altered that sense of security forever, and unfortunately the carnage that we saw in our nation’s capital over a decade ago seems to be repeating itself like history has a habit of doing.

Although not a biopic on Muhammad and Malvo because of the toxic nature of their heinous crimes, the movie “Blue Caprice” starring Isaiah Washington (“Love Jones”) and Tequan Richmond (“Everybody Hates Chris”) focuses on what makes a serial killer tick and the warning signs that, unfortunately, Americans can no longer ignore.

“The film will educate the audience on what (sociopaths and psychopaths) look like,” Washington said to Regal Magazine.  “Too many times in our society, just because someone’s in a position of power, just because someone is smiling and nice every day, doesn’t mean they’re not suffering from some level of mental illness or some predatory behavior.  We see this scenario come out over and over and over…the same ole narrative.”

That “same ole narrative” played out again on Monday, also in Washington, D.C., after the killing of 12 innocent civilian workers at the Navy Yard by a former Navy reservist, Aaron Alexis, with a history of mental illness.

Many of his acquaintances like Melinda Downs of Forth Worth, Texas said Alexis was a “sweet” guy, but “he handled himself carefully” not letting too many people get close to him and sometimes displaying a violent streak.

Like Alexis, Muhammad was able to maintain a brilliant façade.  He became a father figure to Malvo, an abandoned teenager, and even served his country in war.

But like many veterans who were trained to hate and kill on tax payer dollars according to Washington, it is no surprise the façade eventually begins to crack, as well as the individual.

Growing up with a Vietnam War veteran as a stepfather, Washington knew firsthand what war could do to a life.  His stepfather had been shot while serving his country and the Houston native would have to wake him up with a broom because he woke up swinging his fist in fear.

Muhammad’s wife knew that the man she married was a totally different person than the one who came home after the war, but did not realize his actions were virtually a cry for help.

However, “Blue Caprice” will force Americans to pay attention to those cries and not fall into the false belief that people can be perfect.

According to Washington, when someone seems too perfect or too nice, we need to dig deeper to see what they are really about.

“This guy is too damn perfect at this church.  This guy is too perfect (at the head of this corporation).  There’s something else going on,” Washington explained.

Washington’s portrayal of a character inspired by Muhammad will explain how a person can become so perverted mentally that they conspire to kill innocent civilians, while recruiting a teenager as an accomplice and co-conspirator.

The film only dedicates the final 23 minutes to the actual Beltway killings, but deals more with the twisted and toxic father-son dynamic between John and Lee, and how having improper male influences can turn a quiet kid into a cold-blooded assassin.

This dynamic is even more troubling for African Americans as many single mothers constantly look for a male influence in their child’s life from teachers to church members, but do they really know what makes that person tick?

Furthermore, Washington said moviegoers will get to see the killers as human beings, and although you will not sympathize with them, you will empathize with them and understand how they got to the point of taking innocent lives.

Moviegoers will begin looking to their left and right in the theaters, wondering if the person sitting next to them could be capable of such an atrocity.

More importantly, “Blue Caprice” will educate the audience on the clues and the importance of taking every perceived threat seriously.

Washington said if someone is mad at the world and hearing voices, people have to take note of it.

“If someone says they’re going to hurt you, believe it,” Washington said.

In the 1960s and 1970s, threats and other warning signs could be taken lightly, but in the 21st century, listening to the warning signs and understanding the psyche of a person could possibly save the lives of many innocent civilians and prevent tragedies like the Beltway sniper killings and the Navy Yard massacre from ever becoming a reality.