‘The Inevitable Defeat of Mister and Pete’ Overwhelming Winner 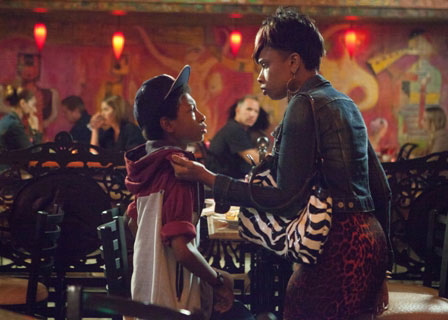 Mister (Skylan Brooks) is basically a motherless child thanks to Gloria (Jennifer Hudson) in “The Inevitable Defeat of Mister and Pete” (Photo Credit: Lionsgate Entertainment, Inc.).

Often people characterize them as bad children, destined for failure in life, whether it is drugs, violence, incarceration or an early death.

Many critics of today’s unruly children, from educators to law enforcement officials, simply label misguided children as a problem, not willing to figure out the root of that problem.

“The Inevitable Defeat of Mister and Pete” explores the root of that problem, which is a sad reality for many children trying to survive in the ghettoes of America with little love and virtually no guidance from elders.

Mister and Pete are two typical children filled with love and aspirations.  If they had been born under different circumstances and to different parents their life could have been much simpler.

A teenager like Mister could have been a child star, excelling on the small screens of Hollywood.

Children like Pete could have still been enjoying the innocence of youth, playing video games with no idea about the pressures that are involved with real, adult life.

However, that is not the world of Mister and Pete.  Their world consists of uphill battles, and the inevitability that they will never make it out of the projects of Brooklyn, N.Y. or foster homes, because of who they were born to and where they were born.

In “The Inevitable Defeat of Mister and Pete,” we are introduced to Mister (Skylan Brooks), a child that is rough around the edges, but a child nonetheless with dreams of greatness despite the odds stacked against him.

Mister wants to succeed in life as evident in his desire to move to Beverly Hills, Calif. to star in a new television series and his utter despair about failing the eighth grade.  The drive is there for Mister to succeed in life, but his life is unfortunately missing a driver that will help him reach his destiny.

That driver should be his mother Gloria (Jennifer Hudson), but she spends her time strung out on heroin and prostituting herself, with no time to guide Mister into the man he is destined to become.

Pete’s mother (Martha Millan) is in no better shape.  Her drug habit forces her to let Gloria look after Pete (Ethan Dizon), but when Gloria is arrested on drug charges, the children are forced to fend for themselves for an entire summer, or risk being placed in a violent and sub-standard group home.

At a time when children should be enjoying a carefree summer, Mister and Pete are forced to go to any lengths just to survive.

“The Inevitable Defeat of Mister and Pete” wins because it forces adults to reevaluate their opinion on the next generation.

“The Inevitable Defeat of Mister and Pete” will make you angry at the adults in the film for not stepping up to the plate and being adults.

It will also make you cry at the pain that children like Pete feel when their innocence is destroyed by the actions of their parents.

And it will make you smile, because any child that can handle such adversity and come out stronger, will have no ceiling to stop them from reaching the sky.