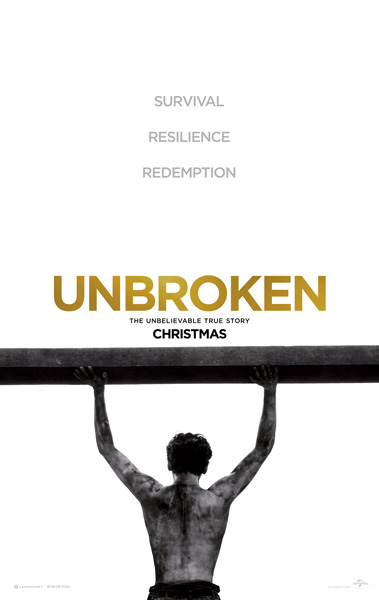 If I Can Take It, I Can Make It

Christians often say that God will not put more on them than they can bear.

Furthermore, some of those same Christians often say that God gives His hardest tests to His strongest soldiers, and very few can match the internal strength of Italian-American hero Louis Zamperini (Jack O’Connell, “300: Rise of an Empire”) whose life is depicted in the Angelina Jolie-directed biopic “Unbroken.”

The word hero is thrown around so much nowadays that some forget what qualifies one as a true hero.  Sports and entertainment produce some great leaders, but nothing creates a true hero like those who sacrifice their life for the freedom of others.

Although he looks like an elementary school student, he gets into countless fights, smokes cigarettes and drinks alcohol regularly.

He is so intelligent that he paints the liquor bottles so that adults will not notice that it is an adult beverage.

Louis consistently brings shame to his family, who is fighting for acceptance in a country that is hostile to Italian immigrants.

His only redeeming quality is his foot speed, which is constantly placed on display when he tries to flee the cops.

He does not even think he can run fast if no one is chasing him, but his brother trains with him until he is standout in the mile at his Torrance, Calif. high school.

Although just a high school student, his exploits in the mile earns him a spot on the 1936 United States Olympic track team, which also features another American hero in Jesse Owens.

He views the Berlin Olympics as practice for the Tokyo Games four years later, but somehow parlays his brother’s “If I can take it, I can make it” mantra into a respectable showing in Berlin.

However, when 1940 rolls around Louis has to deal with the fact that the Olympics have been canceled in Tokyo because of World War II, and that he must trade in his track shoes for military boots and serve his country.

In “Unbroken,” Louis and two other survivors, Mac (Finn Wittrock) and Phil (Domhnall Gleeson), are forced to survive for over a month at sea on a raft after their plane malfunctions on a failed rescue mission.

While many would have been broken, Louis is somehow able to remain unbroken.  Before reaching a breaking point, the survivors encounter that fateful catch-22 moment.  They have finally been rescued, but it is not by Americans or her allies.

“Unbroken” is a brilliant directorial effort for Jolie and a coming out party for the star of “Unbroken,” O’Connell.

The 24-year-old British actor is able to portray Louis with a youthful likability and a seasoned strength developed from growing up rough on the streets of California.

Jolie does a masterful job of realistically portraying the mental and physical anguish of POW’s from their drastic, skeletal-looking weight loss to their struggle to avoid a mental breakdown.

Unfortunately, “Unbroken” spends way too much time dealing with the soldiers’ struggle to survive at sea, which contributes to its slow pace.

Like every film known to man, there has to be villain, which makes every film predictable to some extent.

But when the villain, the Bird (Takamasa Ishihara), leaves moviegoers hating his guts, that means the actor did a marvelous job with his character.

However, those who see “Unbroken” will leave the theater proud, inspired and grateful for the greatest generation.

Luckily, Zamperini got to see the film before he passed away in 2014 because if he forgot what a true hero looked like, he was able to look back at his life and see the epitome of heroism.

God gave him a cross to bear, almost literally, and he did so sacrificially without complaint and with forgiveness in his heart.  For that, we are totally grateful to all of our American heroes who kept the faith so that we could reach the Promised Land.