Movie Review: ‘Miracles From Heaven’ Heartwarming, But Gives Too Much Away Early 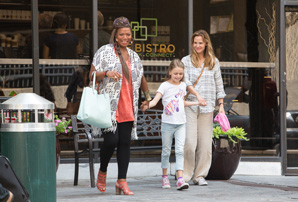 From the producers who brought you “Heaven is For Real,” the feel-good family film “Miracles from Heaven” will take viewers on an emotional roller coaster.

The Beams are from Burleson, Texas and are a classic, southern, God-loving family.

When the middle daughter, Anna, played by Kylie Rogers, falls ill with an inexplicable stomach condition, the family’s faith is tested in more ways than one.

Kevin Beam, the father, played by Martin Henderson, is a veterinarian who has recently opened his own practice.

This causes some financial stress just at the wrong time, as Anna is not getting any better.

After going to a countless number of doctors only to be told “everything will be fine,” Christy, the mother, played by Jennifer Garner, decides to fly with Anna to Boston to try to meet with Dr. Nurko.

Unfortunately, he has a nine-month waiting list and the Beams are towards the bottom, so their chances of coming in contact with Dr. Nurko (Eugenio Derbez) are slim.

With all hope lost, the mother-daughter duo heads to a local restaurant and meet a spunky, kindhearted waitress named Angela (Queen Latifah) who offers to give them a tour of Boston while they wait to hear back from Dr. Nurko’s office.

Providing some comedic relief to both the audience and cast, Angela and the Beams become fast friends.

Luckily, Anna gets an appointment with Dr. Nurko and he finally gives them a diagnosis.

After months of medications and unbearable stomach pain, Anna is finally sent home to Texas.

Her older sister, Abby, played by Brighton Sharbino, asks Anna to go outside and play like they did before she got sick.

The two decide to climb an old, hollowed out tree. As they are basking in nostalgia, the branch they’re sitting on begins to break and Anna ends up falling into this ancient, three story tall tree and hits her head.

A commotion erupts in Burleson, Texas as Anna is rescued and begins to tell the story of how she saw God.

In the film, there is a scene in which the Beams attend their local church, filled with newscasters, to tell the story of these “Miracles from Heaven.”

Overall, this film made for a wonderful and captivating look into the true events of Anna Beam and her family.

Similar to “Heaven is For Real,” “Miracles from Heaven” depicts the influence of religion on our world and shows the power of faith and hope.

I thoroughly enjoyed the way “Miracles From Heaven” was put together.

The constant ups and downs made it impossible to look away and it was hard not to fall in love with the Beam family.

While this movie was heartwarming, a majority of the plot of “Miracles From Heaven” is given away in previews, making some parts quite predictable.

Also, “Miracles from Heaven” possesses some quirky scenes, but they added to the overall mood of the movie.

All in all, I do recommend “Miracles from Heaven” to anyone looking for an uplifting story with powerful acting and beautiful camera work.