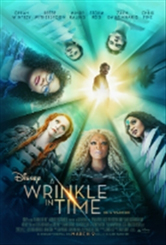 It seems that filmmaker Ava Duvernay can do no wrong on the big or small screen.

First, she hit moviegoers over the head at the theaters with the Martin Luther King, Jr. biopic “Selma.”

Then, she hit television fans at home with “13th,” the Netflix documentary that broke down how slavery still exists in this country in the form of the prison industrial complex, not to mention her hit series on OWN, “Queen Sugar.”

But in 2018, Duvernay is out to prove how much she loves the kids (as rapper Trick Daddy would say), bringing the classic storybook “A Wrinkle in Time” to the big screen in an attempt to unite people during these divisive times.

In “A Wrinkle Time,” Meg (Storm Reid) is about to enter into her awkward teenage years with more stress than the average preteen.

While separated families can usually deal with their realities behind closed doors, Meg’s fractured family is worldwide news.

Her father is not just any scientist.

Mr. Murry is a groundbreaking scientist from Advanced Space Technologies and NASA who has discovered the art of tessering, which is a way of using one’s minds to transport them into outer space and other dimensions and frequencies.

While Mr. Murry and his wife, fellow scientist Mrs. Murry (Gugu-Mbatha Raw) have discovered something truly remarkable, the science community initially laughs and scoffs at their hypothesis.

When Mr. Murry does not come back from his tessering experiment, his family (especially his children Meg and Charles Wallace, played Deric McCabe) becomes the victim of intense bullying in school.

Even their teachers and administrators are somewhat in on the bullying and name-calling.

While the faculty at the schools belief the children are brilliant, they also believe that the Murry kids are extremely odd.

Although Meg does not fully believe in her father’s tessering experiments, young Charles Wallace is a full believer.

However, Charles Wallace must convince his big sister to tesser with him in order to find their father and bring him back home four years after he disappeared.

“A Wrinkle in Time” is a beautiful world of fantasy brought to life by Duvernay and a star-studded cast that has messages that young children need to hear.

The film “A Wrinkle in Time” is a story about light conquering darkness.

“A Wrinkle in Time” is a tale of embracing one’s uniqueness.

And Duvernay’s “A Wrinkle in Time” emphasizes the point that by using the strength of one’s mind and imagination, one can take themself anywhere in the world.

Despite the star-studded cast, which includes Oprah Winfrey and Reese Witherspoon, the adorable star of the film is young McCabe.

His precociousness steals the show in “A Wrinkle in Time.”

Furthermore, Mrs. Who (Mindy Kaling) has her moments too.

Mrs. Who does not speak original thoughts but quotes famous people like William Shakespeare and Winston Churchill to get her points across.

However, her most famous quote in the film is when she urges Meg to get up, get out and get something in the words of hip-hop legends Outkast and Goodie Mob.

Unfortunately, “A Wrinkle in Time” is a fantasy film with a lot of scenes based outside of reality.

However, the real messages relayed in this film are right on time and perfect for all children, and even some adults.