Film Review: ‘Risen’ Will Be Transformative for Nonbelievers 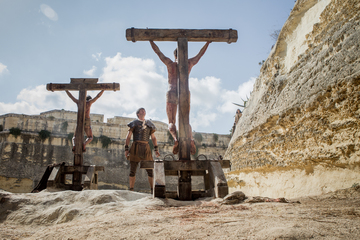 Bible-based films come with a responsibility.

The filmmakers behind “Exodus: Gods and Kings” did not take that responsibility seriously and the film suffered for it critically and commercially.

Other books that are adapted into screenplays usually come with the creative license to alter the story, and sometimes alter it dramatically.

However, the Bible is not just another book and needs no major alterations when turned into a motion picture.

Luckily, “Risen” got that concept correct and created a film that is more powerful f0r the nonbeliever trying to find Jesus Christ than for the believer who already knows Christ.

In “Risen,” Clavius (Joseph Fiennes) is a respected Roman tribune.

His job under Pilate (Peter Firth) is to keep the peace within the Roman Empire.

Because of the threat of a new King of the Jews claiming to be the Messiah and Son of God, Roman subjects are beginning to rebel against the government.

To end any threat of insurrection caused by the ministry of Yeshua or Jesus (Cliff Curtis), the proclaimed Messiah is sentenced to death by crucifixion.

Nevertheless, Yeshua is still a threat to the Roman Empire because He has prophesied that He will rise or resurrect on the third day, which symbolizes eternal life for believers.

Clavius hires two guards to protect Yeshua’s tomb from anyone wanting to steal His body, therefore claiming that He indeed rose from the dead.

Despite the efforts to protect Yeshua’s dead body, He still ends up missing from the guarded tomb.

Clavius and his associate Lucius (Tom Felton) begin a manhunt to find the Nazarene’s body to stop anyone from believing that He is the resurrected Son of God.

However, instead of Clavius finding the dead corpse of the Nazarene, he finds something much more valuable.

“Risen” is the rare Bible-based motion picture that tells the story of the Gospel (the death, resurrection and ascendancy to Heaven of Jesus Christ) from the perspective of a nonbeliever, which makes it extremely powerful and transformative.

Other films have added fuel for the Christian fire, but “Risen” has the potential to reach more people because it deals openly with the doubt and unbelief of so many people trying to come to understand the gospel of Jesus Christ.

“Risen” is shot in a way that it rivals the best of cinematic innovation without resorting to cheesy special effects like in “Left Behind.”

Fiennes is brilliant as a respected Roman tribune torn between what he used to belief in and what he is now seeing before his very eyes.

Stephen Hagan brings “Risen” charisma and personality in his role as Bartholomew, something that is sometimes missing from Bible-based film.

However, in a way this film miscasts the role of Yeshua.

Yes, Curtis does a great job as Jesus Christ.

But his past roles as gangsters in television shows like “Gang Related” and movies like “Training Day” makes it hard to see Jesus when looking at him on screen.

Curtis does his job well.

However, it is extremely difficult to go from gangster to God, or crime boss to Christ on screen and be taken seriously.

Nevertheless, “Risen” is a great film that takes its responsibility seriously.  It is a film that all will be inspired by and non-believers will definitely take seriously as well.