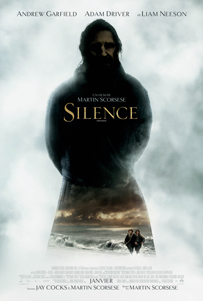 Powerful and Timely But Way Too Long

Although Christians in America arguably do not face severe persecution for their beliefs, there are many countries in which believing in Christianity can mean severe punishment and sometimes a horrific death.

And while Martin Scorsese’s latest flick, “Silence,” centers on 17th century Christian missionaries in Japan, their story is almost identical to the stories of some 21st century Christians in places like the Middle East, which can sometimes be unbearable to learn about.

In the early 1600s, Japan began to experience a spiritual renaissance because of Portuguese missionaries like Father Ferreira (Liam Neeson).

Hundreds of thousands of Japanese residents began converting to Catholicism thanks to the Catholic priest who had set up shop in the Asian country.

As a result of the spread of Christianity, the Japanese Inquisitors began persecuting Christians, especially Catholic priests, unmercifully.

The Inquisitors forced the Japanese Catholics to denounce Jesus Christ by stepping on his image, spitting on the cross or by calling the Virgin Mary a whore.

When the local Christians refused to do so, they were tortured, beheaded or run out of the country.

After word gets back to Portugal that Father Ferreira has denounced Christianity and has died, Father Rodrigues (Andrew Garfield) and Father Garrpe (Adam Driver) beg their boss Father Valignano (Ciaran Hinds) to allow them to travel to Japan to find out for themselves if the story of Father Ferreira is true.

When the two Portuguese priests finally reach Japanese soil, they find a country with a strong Christian presence.

They fear for their lives because of the persecution of Christians.

Furthermore, the Christians in Japan have no priests left in their homeland to guide them spiritually as they walk with Christ.

However, the predicament of the Japanese Christians put the Portuguese priests in a predicament also.

If the priests stay in Japan they can minister to the faithful and continue to spread the gospel throughout the country.

But if they stay, they put the local Christians in more danger of brutal persecution.

However, “Silence” is also extremely too long.

There is no subpar performance in the movie from the stars to the extras.

Garfield, Driver and Neeson give gut-wrenching performances as to be expected.  But “Silence” is very difficult to watch.

Many will probably not be able to stomach the heart breaking persecution endured by the Japanese Christians.

“Silence” might be more digestible if 45 minutes to an hour was cut at the editing table because most of the film is redundant.

Regardless, “Silence” sheds light on the ongoing persecution of Christians and other religious groups throughout the world.

Although Christianity is one of the largest religions on the planet, there are still places where they are the minority.

Unfortunately, the majority has a tendency to oppress the minority, even if the aim of the minority is to promote good and not evil.