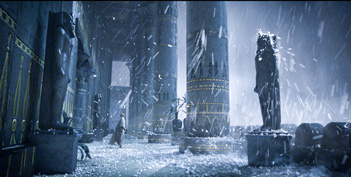 “Exodus: Gods and Kings,” a movie depiction of the biblical story of Moses, (not to be compared to “The Ten Commandments,” the most popular biblical adaptation turned into a movie to date) was lackluster compared to director Ridley Scott’s other film projects.

Starring Christian Bale as Moses, “Exodus: Gods and Kings” did not hold true to the book of the Bible the film is named after, and seemed to tell the story in snippets.

During their strategizing, the High Priestess is summoned to give an account of the outcome when she predicts that one brother will save the other in battle and rise up to save a nation. Of course Moses saves Ramses’ life, which causes insecurity with Ramses, as he’s afraid of losing the Egyptian throne to his adopted brother Moses.

In Scott’s interpretation of Exodus, he highlights the role of Moses as more of a general, who he is referred to as during most of the movie instead of deliverer or savior of the Israelites.

As “Exodus: Gods and Kings” progresses, Moses is betrayed by Hebrew spies and exiled out of Egypt after the true identity of Moses’ lineage becomes apparent to Ramses.

Fleeing to Midian, Moses soon settles into family life marrying Zipporah one of the seven daughters of the Midian priest and having a son.

Content with being a shepherd, father and husband, Moses has an accident and his first encounter with God, which is channeled through a child by the name of Malak, played by Isaac Andrews.

During this encounter, Moses is then given the task by God to return to Egypt and tell Pharaoh (Ramses) to let the Israelites go!

The interaction between God and Moses in the movie seems odd and forced.

There is too much humanity between the two as Moses is very belligerent and sometimes downright disrespectful to the Creator of the universe.

And God is seen as an ill-tempered brat who wants to get back at the Egyptians as if they took away his favorite toy and broke it.

It leaves one to question why Scott portrayed God’s character as a child, unless he was trying to get the audience to connect with Moses through his childlike faith as he was having a hard time accepting the task ahead, or for entertainment purposes only.

Throughout “Exodus: Gods and Kings,” Moses consistently tries to one-up God by taking matters into his own hands and forming a Hebrew army to bring down the Egyptian empire.

As his attempt fails, God tells Moses to watch and learn, (paraphrased)…as God rains down the familiar 10 plagues on the Egyptian empire.

This was probably the best part of “Exodus: Gods and Kings,” as it seemed to switch from a biblical story to a scary movie.

As the film moves past the 10 plagues ending in the death of Ramses’ child to the highly anticipated “parting of the Red Sea,” Scott had the opportunity to get this part right, only to leave audiences very disappointed as this epic event is uneventful in the movie.

Although Scott missed the mark in telling the story of Exodus, he receives kudos for having a diverse cast showing the true descendants of Egypt to be Black.

Unfortunately, “Exodus: Gods and Kings” is very disappointing and does not hold true to the epic biblical story of Moses.