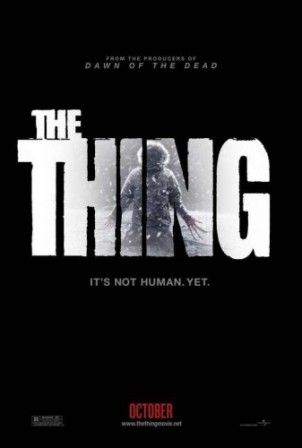 The Thing to See

First things first; although The Thing film is a horror flick, the one Black character in the movie is not the first to die.  Adewale Akinnuoye-Agbaje (Get Rich or Die Tryin’) who plays Jameson miraculously manages to stay alive for the majority of the film.

First we got a Black president, now Black characters last past the opening credits in a horror movie.  Now that is progress.

While celebrating their accomplishments, the alien springs out of captivity and is lost in the Antarctic snow.

Kate is able to discover that the alien in The Thing film kills humans, swallows their body, replicates their cells and is essentially able to clone them in an attempt to harm humans everywhere.

Because they are able to duplicate the humans that they kill and lay dormant in their bodies, everybody is potentially “the thing,” even if they think they are totally human.  Kate is also able to discover that while the alien is able to duplicate flesh, he is unable to duplicate foreign objects in or on human bodies such as teeth fillings and earrings.

The paleontologist is then able to begin excluding certain scientists as potential aliens, but bars anyone from leaving the continent for fear that the alien will infect the rest of the world.

The scientists also quickly find out that nothing kills the alien except fire, not even bullets.

The main antagonist in The Thing film is obviously the alien life form, but Kate’s personal antagonist is Dr. Sander Halvorson (Ulrich Thomsen) who wants to continue his research, despite losing several of his counterparts to the alien, while she is only concerned with saving the lives of everyone at the research site and beyond.

Although the movie ends typically and the characters’ wardrobes look very current despite the movie taking place in 1982, The Thing film, which is a prequel to the original 1982 version, is a very good and suspenseful movie.  The film suffers very lightly because it is not that scary, despite labeling itself a horror film.

Although pleased with The Thing film, many of the audience members seemed disappointed the film ended with moviegoers wanting more.  Nevertheless, with excitement building for this prequel, several cable networks have begun airing the 1982 classic with Kurt Russell, which should give the film another generation of fans.

Furthermore, the fact that audience members will definitely gravitate towards a horror picture this close to Halloween and the fact that Black characters in these films are beginning to last past the opening credits and develop depth as characters, Regal Magazine recommends seeing The Thing film over the Halloween holiday, if it is the last thing you do.