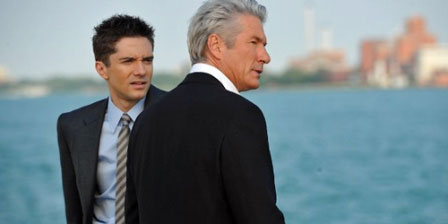 See This Film on the Double

The title of The Double film is perfect in two ways.  First it describes the double life that is lived by Paul (Richard Gere) and it indicates how many times people should see this movie, at least twice.

The Double film is described as a suspense movie. It will definitely have the audience in suspense and on the edge of their seats, with an unexpected revelation at the conclusion of the movie.

When a United States senator with ties to Russia is brutally assassinated, the FBI and CIA come together to find the killer whom they believe is a dormant serial killer that they have nicknamed “Cassius.”  The bureau brings Paul out of retirement, a person that has tracked “Cassius” for years and insists he is dead.

However, a young FBI agent by the name of Ben Geary (Topher Grace) has spent his whole adult life studying the behavior and murders of “Cassius” and he is certain that the former serial killer is back in action and is responsible for the murder of the senator.  “Cassisus” is known for strangling his victims to death with a wire built into his wristwatch.

Paul is sure that Cassius is not responsible for the assassination of the senator because he is holding on to a deeply held secret.  That secret has not affected young Geary’s life because he has not come that close to discovering the truth.  When Geary attended college, he wrote his thesis on “Cassius” but was ignored by Paul while doing his research.

Paul warns Geary’s wife to plead with him to back off of his investigation of “Cassius” because the closer he gets to the truth, the closer he is to losing his life to the demented killer.

Geary correctly believes that “Cassius” returns to the scene of the crime to marvel at his work and he is flabbergasted to find images of Paul in all of the crime photographs.

Furthermore, Geary is also living a secret life and Paul realizes who he is really working with when he finds a completed crossword puzzle in Russian dumped into a trash can by his young partner.

Despite learning the truth about each other, Paul and Ben form a bond, understanding why the other behaves the way they do.  Paul’s wife and child are brutally killed by another Russian assassin and the two team up to avenge that death.

The Double film is the type of movie that you will hate to be the last of your friends to see it, for fear they may spoil the ending.  However, a movie that takes you for a loop after revealing enough information in the beginning to satisfy suspense film junkies is an exceptional piece of work.

The acting by Gere is excellent as always and Grace more than holds his own with veteran actors like Martin Sheen (Tom).

The Double film shows the complexity of human beings, proving that even cold hard assassins can have a heart and be remorseful for their previous sins.

If suspense lovers do not see this film, they will also be remorseful because it is a great film that you will want to see at least two times as the title implies.