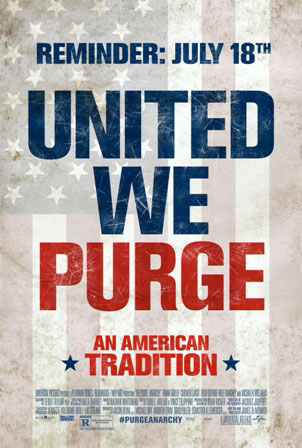 How would you protect yourself if murder, rape, assault and all other violent crimes became legal for 12 hours out of the year?

Many people who you believed to be loved ones could be harboring ill feelings towards you, which could lead to death and destruction without retribution.

The new founding fathers of the United States created a new world order, which has eliminated virtually all crime for 364 days of the year.

They achieve the unthinkable by legalizing the unthinkable.  For one night out of the year they allow all United States citizens to purge or cleanse their inner-beast by allowing all crimes for a 12-hour period.

It is a time when the lawless run loose and the upper class takes out their frustration on the lower class.

Those who do not participate in this “God-forsaken holiday” as Papa Rico (John Beasley) refers to it are forced to stay behind closed-doors in order to remain safe.  But are they really safe anywhere?

In “The Purge: Anarchy,” Eva (Carmen Ejogo) and her daughter Cali (Zoe Soul) are from a lower middle class family who struggle just to make ends meet.

The beautiful Eva has plenty of male suitors at the diner where she works and at the housing projects where she lives, but only has time for caring for her ailing father and her inquisitive and philosophical daughter.

Despite her relationship status, having several male suitors can be beneficial during the annual purge because a beautiful woman can have the luxury of several male protectors.

Regardless, male protection is not necessarily enough to protect someone when they are the targets of those purging.

Liz desperately wants to tell Shane’s sister that they are breaking up, but first they are concerned with surviving the purge.

They have to make a couple of stops before heading home for the night, but when they experience difficulty with their automobile they are stranded downtown where most of the gangs congregate to participate in the purging.

The Sergeant (Frank Grillo) is probably the only person voluntarily in the streets who is not actively purging.

Citizens are not allowed to save lives on the night of the purge, but when he crosses paths with Eva, Cali, Shane and Liz, they all realize they need each other to survive the ritualistic human cleansing.

The term “edge of your seat” is so cliché when describing suspense films like “The Purge: Anarchy,” but there are no other words to describe James DeMonaco’s near masterpiece.

The filmmaker had the wherewithal to cast a real married couple in the roles of Shane and Liz.  Their chemistry is obvious because they probably did not have to think outside of the box to accurately portray their characters.

However, Soul stands out as the breakout star of “The Purge: Anarchy” with her role as Cali.  She is the epitome of wise beyond her years and she has the talent to hang with her older counterparts in the film.

The only thing that is unbelievable about the film is coming to grips with the fact that Eva and Cali are mother and daughter.  Their relationship and their appearance seem more sisterly than parental.

Nevertheless, “The Purge: Anarchy” will keep you wondering; wondering who can the characters truly trust on purge night; how you would handle the purge if it really existed and whether or not you would participate if the purge was legal.