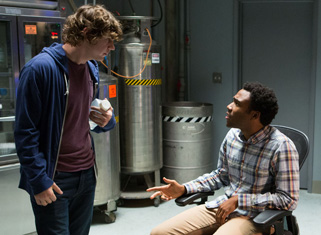 Horrific Horror Hour and a Half

One word can describe the horror film “The Lazarus Effect” – horrendous.

From the very beginning of the movie, the unrealistic scenes leave some viewers wondering, “why go there?”

“The Lazarus Effect” has a known, accomplished cast that seems to have been given an amateur script.

Frank (Mark Duplass) and Zoe (Olivia Wilde) is an engaged couple who are both researchers.

Along with their other team members, they have created a “potion” that proves they can bring the dead back to life.

To prove their theory, they use animals to show how effective their experiment is.

Besides having to make a few changes, they are pleased with their results.

Their “underground” experiments are unethical, and unbeknownst to them being watched.

The dean of the university they work at basically gives them a slap on the wrist, warns them, and ends up shutting their whole operation down.

In a frantic frenzy, the team, which includes Donald Glover (Niko), Evan Peters (Clay), and a young camera girl, Eva (Sarah Bolger), race against time to recreate their invention.

In the midst of recreating the impossible, something goes terribly wrong.

One of the researchers on the team is affected by the malfunction and the team has to make decisions that would change all of their lives forever.

“The Lazarus Effect” is full of classic horror film clichés.

One doesn’t have to wonder what will happen next because it is quite obvious.

“The Lazarus Effect” doesn’t leave the viewer sitting on the edge of their seat anxiously waiting to see what happens next, but instead wondering how much longer it will last.  “The Lazarus Effect” would be the horror film of choice for a viewer who is a newbie to this genre of films.

It would ease them into it without terrifying them and with minimum surprises.

However, for the veteran horror film lover, this one may not fit the bill.