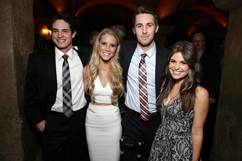 If one does not know their history, they are bound to make the same mistakes repeatedly.

At Beatrice High School there is a lot of drama, literally.

In “The Gallows,” the drama class is a required course where jocks and nerds intermingle awkwardly.

Forcing the students to participate in theater is probably necessary because of the tragic event surrounding the performance of “The Gallows” in 1993.

Over 20 years ago, Charlie was only supposed to be lynched fictionally in the play.  But when something went inexplicably wrong, he was accidentally hanged to death in front of an auditorium filled with students, faculty and parents.

The story about 1993 and Charlie is something like legend at the high school.

Those who were there never forgot it.  And Beatrice High makes sure that Charlie is not forgotten with pictures of “The Gallows” cast displayed in the school’s trophy case.

As a result of the tragedy in 1993, it is even more inexplicable that actress Pfeifer Ross (Pfeifer Brown) is so adamant about re-staging “The Gallows” again.

She recruits Reese Houser (Reese Mishler) to reprise Charlie’s old role much to the dismay of his father Rick (Theo Burkhardt) who wants him to focus on football instead.

The only problem with Reese’s decision to quit the football team for the drama team is that he sucks terribly at acting, a point that his best friend Ryan (Ryan Shoos) reminds him of at every rehearsal.

Ryan has been given the task of videotaping all of the rehearsals and behind-the-scenes activity leading up to the stage premiere of “The Gallows.”

When Ryan realizes that Reese has only signed up to star opposite Pfeifer because he has a crush on her, he devises a plan to cancel the premiere of the play and save his friend the embarrassment of bombing in front of the entire school and community.

When the two friends, along with Ryan’s girlfriend Cassidy (Cassidy Gifford), break into the school the day before the premiere, the school that they love so much shows a sinister side that threatens their future.

“The Gallows” has some chilling and spooky horror scenes towards the end of the film, but it takes too long to get to those scary moments.

The majority of the film is dedicated to the typical shenanigans experienced at every high school across the globe.

This includes the bullying, the puppy love and the overly concerned parental figures.

In addition to figuring out where one fits in while cracking jokes at all of your best friends.

“The Gallows” has some very funny scenes at the onset of the film, but more horror is what moviegoers will want, not more laughter.

The found footage film is shot like “The Blair Witch Project,” in a first-person, camcorder narrative.

However, it is not as effective as “The Blair Witch Project.”

The film would make a very good short film.

Unfortunately, there are not enough scares to make for an effective feature length horror picture.

Furthermore, “The Gallows” does not repeat history in this genre of found footage horror films like its trendsetting predecessor “The Blair Witch Project.”