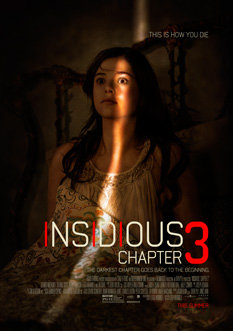 Third Time Not the Charm

Often a movie franchise sets the bar so high that its sequels or prequels cannot live up to the genius of the original.

“Insidious: Chapter 3” takes place a few years before the Lambert family, in the first two installments, is terrorized by the dead.

Quinn Brenner (Stefanie Scott) is experiencing her awkward teenage years without the guidance of her mother, who died of cancer years earlier.

Her single father Sean Brenner (Dermot Mulroney) does the best that he can in raising her and her brother Alex Brenner (Tate Berney), but she desperately wants to reach out and talk to her deceased mother from beyond the grave.

Quinn is finishing up high school.  She is trying desperately to get into a performance arts school to hone her craft as an actress.  And she is trying to navigate her way through teenage dating life, more specifically her neighbor and admirer Hector (Ashton Moio).

A friend recommends that she visit the talented town psychic Elise Rainier (Lin Shaye) who has a gift to contact and communicate with the dead.

Elise has vowed to give up on her dangerous craft, but she sees something special in Quinn and finally agrees to take her case at the “urging” of her beloved dog.

While she is able to make initial contact with the underworld, she urges Quinn to not try this ritual at home because by trying to contact one dead person, she will contact all dead people.

This could possibly lead to demented and evil entities returning to Earth and torturing the souls of the living.

However, “Insidious: Chapter 3” is often more funny than scary, which is the thin line that horror films walk.

Scott is likable as Quinn and her family and friends are likable as well.

But the bar in the first two installments of the franchise is set so high that it would be very difficult to match their intensity.

What moviegoers get out of “Insidious: Chapter 3” is the back story of Elise, why she gave up her gift and how she met her ghost buster buddies Specs (Leigh Wannell) and Tucker (Angus Sampson).

Tucker is hilarious without attempting to be, eating a cupcake and wearing a Masters of the Universe t-shirt, while trying to be taken seriously by his scared clients.

Elise even suggests to Specs and Tucker that if they go in business together that they should wear a shirt and tie, which they tell her ain’t gonna happen.

Unfortunately, laughs are not the desired reaction wanted in a horror film.

“Insidious: Chapter 3” will be loved by people new to the franchise.

“Insidious: Chapter 3” is a pretty good film, despite the criticism.

However, true fans of the series will only like the film, not love it like the first two.