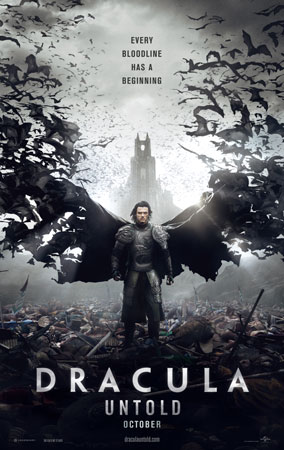 Dracula is like Victor Newman (Eric Braeden) on “The Young and the Restless.”

He has always been a force to be reckoned with, but few remember how he rose to prominence.

Colleagues and fans have died out, but he still remains un-aged and unchanged.

Like Victor, Dracula will probably always be around long after I’m dead, but “Dracula Untold” tells the story of how he actually rose to power in the beginning.

Unfortunately for director Gary Shone, watching “Victor Newman Untold” would be a better way to spend 90 minutes of one’s life.

In Europe in the 1400s, child slavery was an epidemic.

Children were forcibly ripped from the arms of their parents and forced to become dedicated soldiers for their leader.

Even at a young age, Vlad (Luke Evans) distinguished himself as one of the best soldiers in the land.

His exploits led to him being crowned a prince.

Vlad is beloved by his people and loved and admired by his wife and son, who wants desperately for his father to be proud of him.

The prince is assured that the Turks will no longer engage in the practice of kidnapping children and forcing them to fight for their country, but when thousands of Turks come up missing, Vlad is blamed for the disappearances and all bets are off.

Vlad’s soldiers are undermanned and outclassed by their adversaries, but in order to save his son from brutal enslavement and protect his people from evil dictators like Mehmed (Dominic Cooper), Vlad must make a deal with the devil, figuratively, taking the powers of a malevolent underworld demon.

Taking in the blood of this demon will allow him to conquer any opponent, but the insatiable thirst for blood that happens as a result of this deal, has the power to overtake his soul forever if he cannot resist temptation.

The fighting scenes in “Dracula Untold” are adequate and the bat scenes are marvelously shot.

The special effects are great, which is to be expected with modern technology.

Furthermore, Art Parkinson does a pretty good job of expressing his emotions as Vlad’s son Ingeras.

Nevertheless, “Dracula Untold” is simply an average film with very little that would make the film special or inspiring.

The actors do a good job as well as the filmmakers, but a story on Dracula’s beginnings need not be told unless there was something miraculous to tell.

Nothing sets the film apart from others in the same genre.

Although 3-D is overdone sometimes in Hollywood, it would have been interesting to see how a 3-D “Dracula Untold” would have translated to the big screen.

Nonetheless, the film is a decent way to spend 90 minutes over the Halloween season, but it will not leave many overly excited considering the stiff competition that exists at the box office.

“Dracula Untold” will unfortunately have too much competition with films like “Annabelle” and “Ouija,” so seeing the film immediately may not be a priority for horror film lovers this month.

The story of Dracula’s origins may have been necessary for some fans, but a couple of recorded episodes of “The Young and Restless” may be a better way to spend time over the weekend.