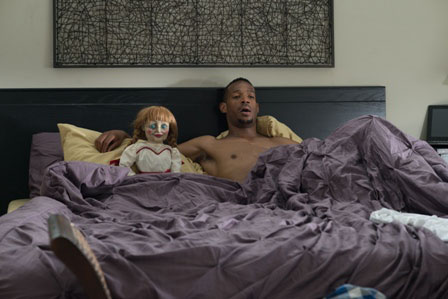 Malcolm (Marlon Wayans) takes a break after putting in work with Abigail (left) in what is sure to be the classic scene from “A Haunted House 2” (Photo Credit: Will McGarry/Open Road Films).

What You See is What You Get

For some reason, when I think of actor and comedian Marlon Wayans, I think of the 1972 hit song “What You See is What You Get” by The Dramatics.

First of all, Wayans was born in 1972, the same year the song was released.  And furthermore, that phrase is the best way to describe his comedy style.

It will not make audiences think too hard and it is definitely not “intellectual like” satire, but that does not matter.

The baby of the legendary Wayans family is absolutely hilarious, which is why “A Haunted House 2” avoids being corny.  Instead, it is beyond comical and downright hysterical at times.  How Wayans can even fathom some of the scenes in the film like having sex with a creepy doll named Abigail is proof of his sick (and I mean that in a flattering way) ingenuity.

Additionally, Wayans is beginning to channel his big brother Keenan Ivory Wayans in his ability to recognize talent in other comedians.  His older brother is responsible for recognizing the talent in future stars like Jim Carrey and Jamie Foxx and putting them in the perfect spot to shine.

Likewise “Baby Way,” as his production company is called, selected the perfect comedians to assist him in the debauchery of “A Haunted House 2” like Cedric Entertainer and newer stars Affion Crockett and Gabriel Iglesias.

If you have not seen “A Haunted House,” check it out before seeing the sequel.

The second installment picks up where its predecessor left off.

Malcolm’s (Wayans) girlfriend Kisha (Essence Atkins) becomes possessed by demonic forces when they decide to move in together.

With the help of his crazy cousin Ray-Ray (Crockett), Malcolm is able to distance himself from his crazy ex-girlfriend and a year later is married to a woman, played by Jaime Pressly, who happens to be White and a single mother.

Although Malcolm thinks he has buried his demons in his past, they along with Kisha, show up anyway to wreck his happy home.

Despite the house being beautiful, Malcolm soon discovers that a demonic man once tried to hang a family in the backyard of the home and the demonic forces are still very much alive.

Not only does Malcolm have to battle evil physically, he must also battle what the paranormal activity is attempting to do, which is to break up his blended family.

“A Haunted House 2” consists of a simple plot line and simple jokes, but it simply works out masterfully for Wayans.

The jokes and punch lines are over the top and they work.

Malcolm brags that his interracial relationship with Jaime Pressly would piss off her forefathers and it actually pisses off the lonely, bitter “sisters” that confront him about it at the church house.

When the demonic force kills his new dog, Shiloh, Jr., he urges his wife and children to call 911 and tell them that the dog is white, as if to say that would make the first responders come quicker.

His stepson has what appears to be a Black, progressive imaginary friend because his stepson begins referring to Malcolm with very emasculating terms usually associated with people from the inner city.

And when Father Doug (Cedric the Entertainer) stabs a priest at church with his only knife, Father Doug explains that he does not carry two knives anymore because people were beginning to refer to him as 2 Shanks, like the rapper 2 Chainz.

What would have made “A Haunted House 2” even better is if Crockett would have received a larger role.  He is a comedian that is respected in the game, but does not necessarily receive the credit that he is due.

His star should continue to rise and if there is “A Haunted House 3,” Ray-Ray should play a bigger role in the shenanigans.

Nevertheless, Wayans’ newest comedy franchise is another success story not because his films break new ground in cinema, but because fans know what they are going to get from him, and fans continue to get from Wayans what they see, which is over the top humor.